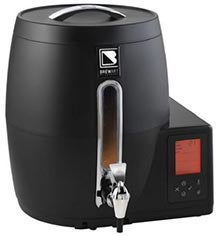 If you’ve been to a bar or sporting event recently, you’ll know that paying $8 for a mid-strength beer can get old quickly. As alcohol prices tend to go up and up – even in bottle shops – it can be tempting to look at making your own brews. However, this comes with a certain amount of scientific expertise, patience and risk that can turn off a lot of brewsters. If only it was easy to make your own beer at home! Well now you can, thanks to the ‘BeerDroid’ by Coopers Beer.

Making moonshine in your bathtub may carry romantic notions but the fact is it’s dangerous, and likely to be unpalatable the first time you try it. Not many people have the time to make a beer exactly to their own tastes – beer is one of the more difficult and particular alcoholic drinks to make. BeerDroid takes out this fine-tuning process and – like coffee machines nowadays – makes brewing a beer as easy as possible. It has been designed for people less concerned about price, but rather more interested in craft beers and brewing, and dispensing pub quality beer.

It’s all about creating a pub experience in your own lounge. Canstar Blue’s research committee was impressed, raising a glass to Coopers with an Innovation Excellence Award in August 2016.

Why is the BeerDroid innovative?

Part of Coopers’ BrewArt set (which also includes the ‘BrewFlo’ appliance for dispending your home brew) the BeerDroid is the world’s first fully-automated personal brewing system. The bottom line is that BeerDroid blows wide open a market aimed at people wanting to step into homemade beer, who don’t have the time for the previously meticulous process. It’s an impressive piece of kit, and changes the game, here’s why:

Watch this video and we recon you’ll be impressed, too:

Is the Coopers BeerDroid worth the money?

The BeerDroid is likely to divide opinion. This is especially true for the purist brewsters out there who enjoy the month-long process of doing everything from scratch. Though, if you – like many others – like a good beer and are interested in the brewing process, then it may well be worth the $699. It’s also great for social occasions where brewing on a concentrate that makes 10L of beer could be well cheaper than buying a carton or two from the bottle shop.

You’re also paying for top technology. Many people wouldn’t blink twice at paying over $500 for an espresso machine, so for those into beer, the BeerDroid may not be that much to scoff at. It is the world’s first automated personal brewing machine after all and to be at the forefront of technology, you pay the price. If you like beer, and you are generally interested in brewing your own but don’t have the time or resources, then the Coopers BeerDroid may be for you.