Internet service provider Activ8me has been fined more than $12,000 by the consumer watchdog for alleged false and misleading representations about an endorsement from the watchdog itself.

The Australian Competition and Consumer Commission alleged that between November 2017 and January 2018, Activ8me published on its website that it had been “Named Australia’s #1 SkyMuster provider by the ACCC”. 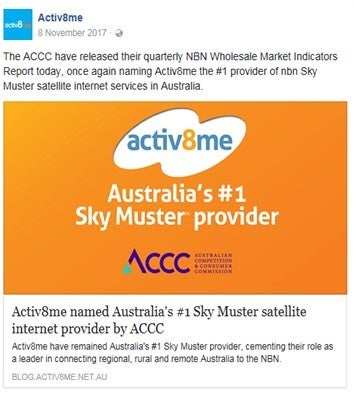 The ACCC logo was published in close proximity to both statements. The consumer watchdog’s Wholesale Market Report did list Activ8me as having the highest number of satellite services in operation, but does not endorse or approve of the telco over other providers.

ACCC Commissioner Sarah Court said: “The ACCC does not endorse or approve particular businesses and it is imperative that consumers trust our name and logo when it is used.

“As soon as we become aware of the misuse of our report findings and logo, we contacted Activ8me and issued an Infringement Notice. Activ8me has since removed the representations.

“The penalty serves as a warning to companies that we will act swiftly if they misrepresent the ACCC.”

What other telcos are in hot water?

The NBN has been a hotbed topic recently, with large telcos Telstra, Optus and TPG all coming under fire from the ACCC for alleged misleading representations about potential download speeds. This has led to the three telcos compensating customers for advertising speeds that could often not be achieved.

Fixed line NBN operates on four speed tiers, with the quickest being up to 100Mbps. Prior to the ACCC crackdown, telcos would readily advertise 100Mbps plans, even if some customers were not achieving close to this.

Telcos now advertise ‘evening speeds’ that are more realistic representations of speeds in peak times between 7pm and 11pm.

Canstar Blue research indicates that nearly two thirds (65%) of households upgraded to a faster speed plan when they switched to the NBN. 73% also switched over straight away, while 79% described their NBN speed as “adequate” for their needs.

The average monthly spend of survey respondents on their NBN plan was just over $78, with just 46% saying they had an unlimited data plan.