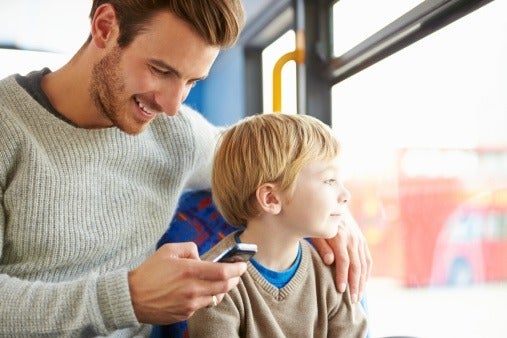 In a study released this year, 1 in 3 Aussie children said their parents spend as much or less time paying attention to them as they spend on their mobile phones. The study was conducted by AVG® Technologies, the award-winning online security company, and uncovered some worrying trends in how children viewed their parents’ mobile device use.

Over half – 52% of children – said their parents check their devices too often. They rated “being distracted by the device during conversations” as their biggest grievance, and 26% said this made them feel unimportant.

39% of Aussie kids said they would confiscate their parent’s device if they could.

AVG went one step further and also surveyed parents about the mobile use. 54% of parents agreed that it was too frequent, and 32% felt that they didn’t set a good example to their kids. 26% of parents said they wished their child used their device less.

AVG Security Awareness Director Michael McKinnon said, “With our kids picking up mobile devices at an increasingly younger age, it is really important that we set good habits within the home, early on. Children take their cues from us for everything else, so it is only natural that they should do the same with device use. [We] need to lead by example.”

Talking to your kids is the number one way that they learn to recognise and use social skills, learn that they are worthy of love and attention, and learn about the world and how it works. It’s a much-used saying that children in their early years are like sponges – so you don’t want them to be “soaking up” a sense that you aren’t interested in them, and you don’t want them ending up with the same addiction to technology.

In this global study, the clear winners in excessive device use were Brazilian parents, with 87% of their children saying their parents used their mobile phones too much. Even scarier is that the majority (59%) of Brazilian parents confessed to using the phone while driving.

To hear interviews with some of the parents from the study, watch AVG’s video online.

8 tips for avoiding the phone/kids showdown

So what is to be done? We offer up the following 8 hints in the interests of family harmony…

Parents can feel that everything that comes through on their phone is equally urgent, with retweets and SnapChat on the same level as texts or calls from work. When you realise you’ve picked up your phone again, stop and ask yourself, do I really need to check this right now? If a text or email has arrived this minute, will anybody die if I don’t answer it for 30 minutes?

If the answer you give is that you don’t need to look at it but you want to, put it down and try looking around you for the next minute. See what your kids are up to. Check what expression they’re making now – we guarantee it won’t be the same from minute to minute.

When you catch yourself thinking about your phone, be mindful of your thoughts and physical sensations. You might feel butterflies turning in your stomach, tension in your neck and shoulders, or your hands squeezing as if they were holding your phone. If you notice these anxious reactions but don’t act on them, eventually they fade away.

Assign a couple of times each day when you are allowed to check your phone or emails. You could schedule these times when you are away from your kids anyway, like your lunch break at work or after the kids have gone to bed.

Kids in a US study labelled mealtimes, after school pick-up times and sporting events as the most important times for them to have their parents’ undivided attention, but that shouldn’t be all you give them.

Let’s say you use your phone for way more than just interacting with the world. You like the calendar app, and the calculator, and the stopwatch. We get it. Try setting your phone to silent, DND (do not disturb), or flight modes when you’re with your kids.

Each mode has different benefits. Silent cuts down on the bings and boops that clutter your audio world, so you can hear your kids better. DND means you can still receive calls, but all other notifications get silenced – which is great because if something is life-or-death important, people will call you. Flight mode means you won’t receive any notifications, but you can still use apps as needed. This does not include games and other time-wasters.

What’s the right age to give your child a phone?

Don’t say “just five more minutes” or “just one more phone call”. If you need to, start a 10-minute stopwatch on your phone so that you stop work or browsing and return to your family before they have time to miss you.

If you’re expecting an important call that you can’t miss, let the kids know so they aren’t surprised when you have to duck away for a few minutes. Make sure they know how long the call will probably take and that you will come back to them once it’s over.

Maybe it’s genuinely hard for you to engage in your son’s long and wandering story about the dinosaurs he drew today at kindy. You might not want to use guilt to motivate yourself, but think of how crushed your son would be if he thought you weren’t interested in him and his day. Remember that you want him to still come to you for a chat when he’s 15 and his friends have started drinking and staying out late. Then do your best to actively keep listening, and try to show him that you’re paying attention.

You’re human. You won’t get it right every time. Apologise sincerely to your kids whenever you realise that you have once again fallen down the rabbit hole into the pit of digital delirium.

For more inspiration, read this tech mum’s story about how she put down her phone for a week, and set new boundaries for when she picked it back up again – successfully.

Who does all the vacuuming at your house? (Tips on getting your kids interested and involved in household chores!)

How young is too young for make-up?