Two of Australia’s most popular prepaid providers have been slapped with hefty fees for allegedly misleading customers about their ‘unlimited’ mobile plans.

The Australian Competition and Consumer Commission (ACCC) has confirmed that each telco has paid penalties to rectify a potential breach of Australian Consumer Law.

The ACCC alleged that both Amaysim and Lycamobile separately ‘misrepresented’ the inclusions of their respective mobile plans, possibly leading customers to believe that each provider offered unlimited mobile data.

In reality, neither telco sells an unlimited data mobile plan, although Amaysim did briefly offer a limited-time unlimited data allowance on selected plans. Recognising that Amaysim and Lycamobile’s advertising could be misleading to consumers, the ACCC issued both providers with infringement notices consisting of a financial penalty – in this case, $126,000 for Amaysim, and $12,600 for Lycamobile.

The ACCC alleges that in November 2019, Lycamobile published a Facebook advertisement which referred to ‘Unlimited Plan S’ and ‘Unlimited Plan M’, two plans which include unlimited standard national talk and text, but capped data allowances. While Lycamobile does use ‘Unlimited’ in the name of each of its SIM-only plans (e.g. Unlimited XS, Unlimited 20), it’s important to note that none of these plans are unlimited in terms of data inclusions. 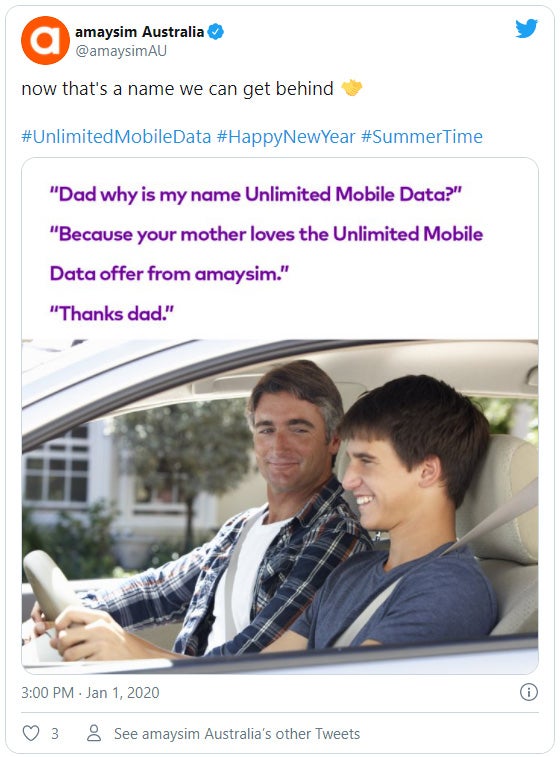 Amaysim’s case is a little more complicated, as the telco did give selected customers an unlimited and uncapped data allowance – but only for a limited time. Back in December of 2019, Amaysim offered new customers on its $40 and $50 plans unlimited full-speed mobile data for their first three plan renewals, after which data would then revert back to standard capped inclusions.

However, the ACCC deemed that Amaysim’s promotion of the offer – specifically a Twitter advert with the hashtag #UnlimitedMobileData – was another breach of consumer law that could fool new customers into thinking that unlimited data was available for the duration of their plan.

“Consumers who saw the word ‘unlimited’ in the advertisements without any explanation of the limits of the plans were likely to expect they would not be charged additional fees for mobile data, no matter how much data they used,” said ACCC Chair Rod Sims. “The telco industry has been previously put on notice that their advertisements must be clear and transparent, and must not contain claims like ‘unlimited’ without a clear and prominent disclosure of any qualification or exception which applies to the offer.”

Amaysim has responded by calling the ACCC’s decision disappointing, particularly as the offer was designed to reward customer loyalty and offer additional plan value.

“The penalty relates to two Twitter posts which the ACCC claim may have been misleading in relation to the period of time that bonus data associated with one of our mobile plans, was available for. The ACCC had no issue with the promotion of the offer on our website, where a consumer must have had to visit if they purchased, and which made the conditions explicit, prominent and clear,” said Amaysim in a statement.

“Our Unlimited mobile plan offer, as referenced by the ACCC, was offering truly unlimited data and did not impose speed caps or thresholds in relation to the respective data allowance. The offer was initially valid for three renewals over the summer period, but was extended for many customers at no extra cost through to 30 September 2020 as a part of our COVID-19 customer response.”

Despite the ACCC crackdown, ‘unlimited’ data mobile plans do exist in Australia. If you’d love a plan without excess data fees – even as a backup for those heavy-use months – we’ve compiled Telstra and Vodafone plans with unlimited speed-capped data in the below tables.

While neither Amaysim nor Lycamobile currently offer customers unlimited data, you can get unlimited gigabytes on plans from two major providers. Telstra and Vodafone each offer unlimited data on SIM-only postpaid plans (including plans tied to a new phone), but there’s a small catch – ‘unlimited’ data is limited to certain speeds.

Telstra has abolished all data overage fees within Australia for postpaid mobile customers, and now includes unlimited data capped at 1.5Mbps speeds on all four of its postpaid plans. This is in addition to a full-speed 4G/5G data allowance each month, so once you’ve used up all of your included fast data, you’ll simply be switched to a slower speed until your monthly billing cycle resets.

In comparison, Vodafone has recently shaken up its postpaid plans to include unlimited data on three speed tiers. Depending on your plan choice, you’ll get an included full-speed data allowance each month, plus unlimited data capped at either 2Mbps, 10Mbps, or 25Mbps. While 1.5Mbps and 2Mbps are fast enough for everyday web browsing, and even standard definition streaming, you’re less likely to notice a speed difference on Vodafone’s 10Mbps and 25Mbps tiers – and you can even stream HD Netflix on speeds of 10Mbps and up.

However, all of Telstra and Vodafone’s plans offer the freedom to stream, download and post without needing to keep an eye on your data, so both providers should be on your shortlist if you’re looking for a data-packed plan without overages.