You may know Motorola best as the company behind the iconic Razr flip phone that was the envy of every phone owner in the 2000s. Motorola has long history of releasing solid and stylish devices, and its newest budget smartphone, the $299 Motorola G8, is now available for purchase through Vodafone.

The Motorola G8 comes with some great features, and being coupled to a Vodafone phone plan makes it an attractive offer, especially considering what Vodafone is throwing in with G8 sales – a bonus Lenovo Smart Clock with an inbuilt Google Assistant (valued at $129).

The Motorola G8 – Pick it up with a Vodafone plan

Vodafone is offering the G8 on device payment plans spanning 12, 24 and 36 month periods. You’ll be able to couple the phone to any of Vodafone’s five month-to-month postpaid plans. Orders made before December 31 (and while stocks last) will include a Lenovo Smart Clock, which also includes a Google Assistant.

Prices and payment periods for the G8 can be found below:

The following table shows selected published postpaid Vodafone plans on Canstar Blue’s database, listed in order of cost, from the lowest to highest and then by data allowance, largest to smallest. Use our comparison tool to see plans from a range of other providers. This is a selection of products with links to a referral partner.

Should I buy the Motorola G8?

The Motorola G8 is a well-rounded budget smartphone, sitting at a nice price and with great mid-range features. The most attractive feature is certainly the price – at $299, it’s hard to beat for anyone looking for a reliable Android phone on a budget. The bottom line is, if you’re after a value-for-money-phone, you could certainly do worse than the Motorola G8.

The phone comes with 64GB of internal memory with 4GB of RAM, with an upgrade-able memory card option in the SIM slot. The battery is a large 4,000mAh, charging with 10W.

There’s also a Snapdragon 665 CPU and Adreno 610 GPU built into the phone, so this phone will be able to handle games pretty well. Through Vodafone, you can get the G8 in Blue or White.

The Motorola G8 is featured in our guide to the best Android phones of 2020. We placed the G8 as one of the best budget to mid-range phones in our list. 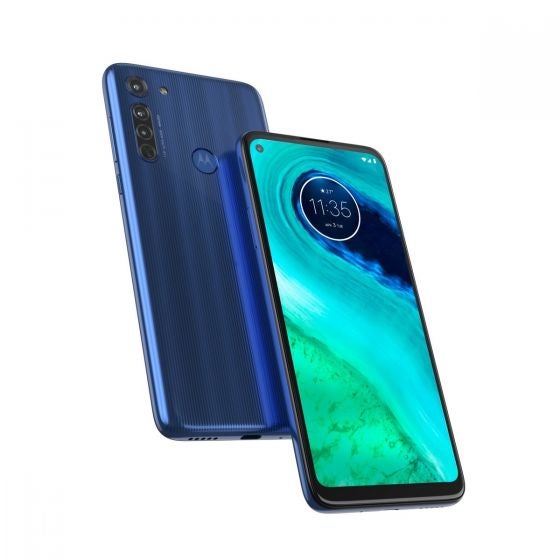 Should I go with Vodafone?

As one of Australia’s ‘big three’ telcos, and one of the only telcos that sells phones on plans, Vodafone has a lot to offer if you’re looking for a brand new device.

All of Vodafone’s postpaid plans are unlimited – so on top of offering a monthly allowance of gigabytes with unlimited speeds, plans also include unlimited data speed-capped to 1.5Mbps. Vodafone is also currently running some big specials across all postpaid offerings, saving you up to $180 over 12 months on selected plans.

If you’d like to compare Vodafone’s phone plans compare to the competition, see the table below.