Remember the original Nokia 6310? Back in 2001, it was one of the best phones out there for its long-lasting battery, its easy-to-understand operating system, and its incredibly durable nature, with the ability to survive massive drops.

To mark the 6310’s 20th anniversary, Nokia is releasing an updated model of the iconic device, with a range of upgraded features and, of course, the game Snake inbuilt (SNAKE!). It’s no smartphone – but no smartphone is as durable as the classic ‘brick’ handset.

The Nokia 6310 will be given a new release later this year as a ‘feature phone’. Although it will now come with a rear camera, a colour display, and access to news and radio services, it’s not a smartphone: but that’s part of the appeal, considering both the price, and the fact that some people just don’t want smartphone features.

Unfortunately, the 6310 seems to only be compatible with GSM 900/1800 frequencies, or 2G – and Australia’s 2G networks have now been switched off. This means you won’t be able to use the device for calls or texts in Oz, but if a revamped brick phone does appeal to you in 2021, here’s what you can expect from the Nokia 6310.

Unlike the new Motorola Razr, which was released last year with a folding touch screen, the 6310 isn’t a phone that’s necessarily riding on the deeply-felt nostalgia for yester-year. The 2021 version of the Nokia 6310 provides several upgrades, and fits in well alongside Nokia’s range of modern feature phones.

The Nokia 6310 comes with a similar tough shell to the original 2001 model, and features a curved 2.8″ display and a refreshed design. The bigger screen is certainly a noticeable change, as is the new directional button. For comparison, the old phone and the new phone are shown below. 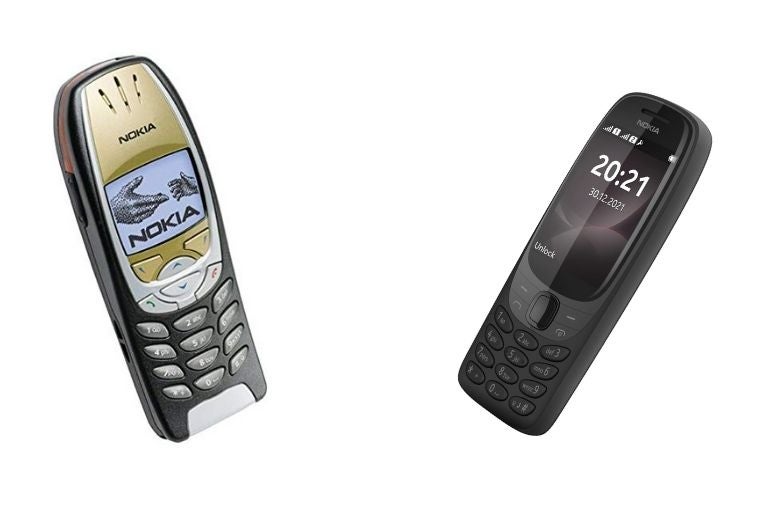 The camera on the back of the device is 0.3 megapixels, and features a built-in flash which can also be used as a torch. The phone includes dual-SIM capability (for a mini-SIM and a nano-SIM), with 16MB of internal memory and 8MB of RAM.

Battery-wise, Nokia says the new phone can last 21.7 days on standby mode, with 19.45 hours of talk time. A headphone jack is included, as is a microSD card slot, loudspeakers and Bluetooth connectivity.

The Nokia 6310 comes with a micro-USB cable and a charger – that’s a different cable and charging port to what’s commonly used today, which is the USB-C cable. These aren’t compatible, so you’ll need to use your micro-USB cable when charging the 6310.

Is the new Nokia 6310 available in Australia?

We might see the Nokia 6310 arrive on our shores, although phone manufacturers have been known to skip Australia in the past (such as Microsoft with the Surface Duo and Google with the Pixel 5a).

If you’re interested in picking up a prepaid or a postpaid phone plan in anticipation of your new phone, check out the plans in the table below. If you’ve got a smartphone, consider getting a phone plan with a bit more data. Using social media apps, Spotify, and Netflix daily can burn through your data allowance, so consider how much data you might use in a month. You can compare plans using our comparison tool.