Coal based power and other fossil fuels are often criticised for having a detrimental impact on the environment. Many Australians make some sort of effort to be environmentally conscious. Many more would consider themselves to be environmentally sensitive, but how far are they prepared to go, in monetary terms, when it comes to investing in alternate energy sources? The results might surprise you!

Are Aussies willing to pay for green energy?

We surveyed 2,500 energy customers about their views on investing in alternate energy sources to find out if they would be prepared to pay more for cleaner, greener energy. The end result is – to put it frankly – is that most were not willing to pay extra.

Two thirds of survey respondents said energy providers should invest in alternative energy sources, but they would not be prepared to pay more to support this. This investment includes things like the Government initiative GreenPower.

The survey yielded some interesting generational differences when it comes to views on alternate energy sources.

It would be interesting to see the factors that gave us these results. While Gen Y had drastically lower ‘not willing’ rates than Baby Boomers, Baby Boomers on the whole are ‘willing to pay more’. Is it because they – generally speaking – have more money? We can never properly quantify that for certain, but these survey results provide a great insight into attitudes.

Along with generational differences, respondents in some states were more likely than those in others to support renewable energy sources.

It would be interesting to get the ‘why?’ behind the data. While electricity prices may split the opinions of many Australians, we can all agree that keeping an eye out for a better deal is a smart idea. Check out the latest Canstar Blue customer satisfaction research and ratings for electricity providers.

Does this reflect the global view on renewable energy?

At an individual level, customers in Australia were generally not willing to pay extra for renewable energy. Though, this goes against the global trend that is moving towards renewables.

Despite our heavy reliance on fossil fuels, plenty of initiatives are currently in place to utilise renewable energy sources to help ‘keep the lights on’. For example, did you know that 13.14% of Australia’s electricity was generated from renewable sources in 2012, according to the Clean Energy Council?

The New South Wales Trade and Investment website also cites wind power, solar power and bioenergy as avenues utilised for alternative power generation. While paying more for renewable energy is a big fat ‘no’ for most people in Australia, the fact is that they are paying for it somehow – either through Government taxes or other initiatives.

Renewable efforts are a worldwide initiative, never more apparent than in a 2013 report from a French research outfit called Observ’ER.

This one percentage point jump from 2011-2012 is impressive. In the future, we hope that this trend of renewable energy continues to grow, with governments placing increased efforts to build infrastructure to support this. While our survey subjects ultimately said ‘no’ to paying extra, are you going to buck the trend and invest in renewable energy? 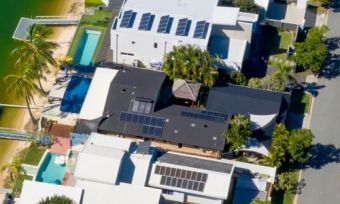