The ratings are based on a survey of 1,375 Australian consumers who have bought groceries online in the last six months. Grocery Run and Aussie Farmers Direct were the only retailers to score five-star ratings on value for money and overall customer satisfaction.

“Coles and Woolworths are clearly the two biggest retailers, but these results show they are trailing in terms of customer satisfaction,” said Head of Canstar Blue, Megan Doyle. “The biggest threat to their physical stores is coming from ALDI and the competition from other retailers is just as fierce online.

“Consumers predominantly order groceries online out of convenience, but that doesn’t mean they’re happy to pay more than they have to. Just like a lot of Australians who buy their groceries in physical stores, people who buy online are happy to shop around and find a different website if they believe there is better value to be had. And it’s much easier to jump between different websites than it is to drive to another supermarket.

“From our inaugural review of online grocery shopping, it’s clear that consumers who shop with Grocery Run and Aussies Farmers Direct are confident they are getting a good deal. Online shopping is set to become the supermarket battleground of the future and these two retailers are offering a proposition that is appealing to consumers – in regards to their variety of products, the ability to buy in bulk and the value for money they are deemed to offer. They were also the only two retailers to receive top marks for website navigation.”

Why do consumers shop online?

The survey found that just 20% of respondents – who have bought groceries online in the last six months – do all of their shopping this way. While 55% always use the same website when they buy online, 36% said they have tried more than one online grocery store and the same number (36%) use a different online chain to the one they would normally visit in person.

While only one in five consumers do all of their grocery shopping online now, 42% expect to do the majority of it online in the future. The survey found 35% of consumers buy their groceries online because it’s easier than shopping in a physical store, while 24% said they simply don’t have the time to buy in store, 17% think it works out cheaper buying online and 7% don’t like visiting supermarkets.

Most recently, 30% of survey respondents ordered their groceries online and then collected their shopping in person, using ‘click and collect’ services. 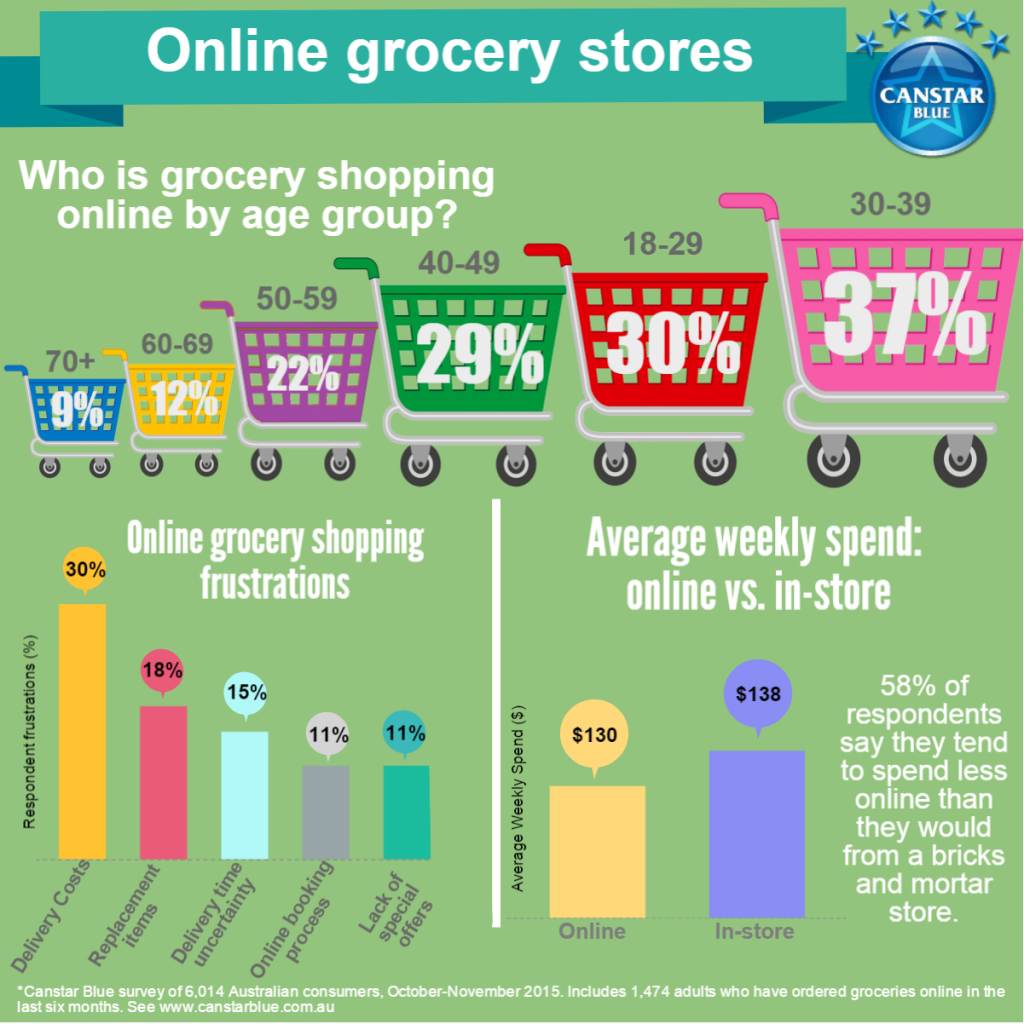 More than half of consumers (58%) said they tend to spend less online than they would if they bought their groceries from a bricks and mortar store, despite the additional cost of delivery. Overall, survey respondents reported an average weekly spend of $130 on their weekly online shop. A previous Canstar Blue study found that consumers spend an average of $138 per week when they buy groceries in store.

However, buying groceries online is not without its frustrations, with delivery costs found to be the biggest cause of complaint for 30% of online shoppers. Following that, 18% said their greatest cause of frustration was receiving replacement items for products that were unavailable and 15% cited uncertain delivery times. Just 11% said the online booking process was their greatest annoyance, while the same number (11%) were most upset about a lack of special offers online. Just 7% have no complaints with shopping online.

Canstar Blue surveyed a total of 6,014 Australian consumers and found that 25% (or 1,474 people) had bought groceries online within the last six months. Of these, 1,375 took part in rating the online grocery store they had most recently used. The online survey was conducted across October and November 2015.

Aussies in their 30s behind supermarket price war

Surviving the supermarket when you’re on a diet 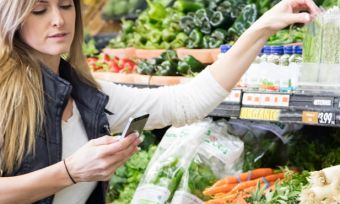