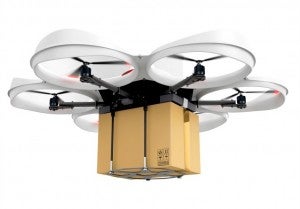 For most normal package deliveries, regular mail, express postage or courier service usually work fine and get the job done in a reasonable amount of time. But what if you could receive your deliveries even quicker? We all know that feeling of anticipation when you buy something online and are left waiting for days for it to be delivered.

Thanks to drones, you could one day receive your new items in under an hour. Drones are currently being heralded as the future of home deliveries, with parcels lifted straight from the distributor to your front door in record time and with record efficiently.

Earlier this year, Amazon made headlines around the world after showing off its delivery drone prototype, which it hopes will see packages delivered to customers within 30 minutes or less. And Australian company Flirtey made news for its Federal Aviation Authority-approved drone delivery demonstration.

While things like pizza, textbooks and chocolate have been delivered by drone before, they have been controlled and piloted, whereas the Flirtey drone is autonomously operated. The drone, which delivered medicine and supplies to a rural health clinic in Virginia, is one of the first to undertake a successful and government approved autonomous flight in the real world. The flight was shown at a NASA convention, where Amazon also made its proposal for drone delivery and its own designated airspace for said deliveries.

What about my business?

As far as small business is concerned, drone couriers are still a long way off. Currently, drones are allowed to fly commercially in Australia, but there is still quite a lot of red tape to cut through, and a few grey areas that could use some clarification. However, it isn’t necessarily illegal, and drone photography is a business that is growing here in Australia.

If one day drones deliver our important packages locally, they have some serious potential to save time and money, for both the business and the courier company. It’s already on its way (sort of), with successful tests in New Zealand, where Flirtey partnered with a courier company to send car parts across Auckland.

We know that drone deliveries are very much a possibility, and there are companies working on making it happen right now. The successful tests make the future of drones and business look bright; their speed, efficiency and technology are set to propel businesses into a new technological era.

So, perhaps in the next few years we will spot drones hovering overhead to take a photo, or buzzing past our office windows to make a delivery. Watch this space.