Technology is a fundamental part of a modern-day business. From the computers and mobile phones which we use for work and organisation, to industrial appliances like whitegoods, vehicles and countless others, even small business use a variety of complex machines. But when one of these devices comes to the end of its life cycle and needs to be disposed of, there emerges a growing problem that exists worldwide – the problem of e-waste. 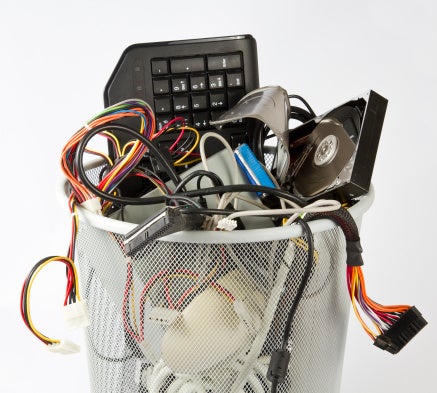 E-waste essentially refers to any electrical or electronic products that are no longer useful. For businesses, this usually includes computers and their peripherals, mobile phones, printers, cameras and so on – anything with complex electronics at its heart. Electronic products contain small amounts of many different substances like metals and chemical compounds, and this fact makes them difficult to recycle; it takes a lot more time and effort to extract tiny amounts of ten different metals from a microchip than it does to melt down a big piece of steel.

This unfortunately means that e-waste is often simply thrown out rather than recycled for the valuable elements it contains; The ABS states that “Of the 15.7 million computers that reached their ‘end of life’ in Australia in 2007-08, only 1.5 million were recycled – that’s less than 10%” (ABS). The same report said that Aussies buy more than 4 million computers and 3 million televisions each year, a number which will only have increased in the intervening years. The fact that devices are upgraded as frequently as every year or two means a growing amount of electronic waste being thrown out. Unfortunately, this can have some pretty bad consequences.

When e-waste is simply dumped and left to degrade, the chemicals used to make the technology function can have adverse effects on the environment. Leaded glass in older TVs and computers, metals such as lithium and cadmium in batteries and the sheer amount of non-degradable plastic used in most products can all leach into soil and water systems, which then spreads them to humans and animals alike and causes all sorts of health issues. Furthermore, it’s actually cheaper overall to recycle resources than it is to mine them out of the ground or synthesise them: according to Clean Up Australia, recycling aluminium uses up to 95% less energy than mining it from bauxite, not to mention the huge savings in terms of water and greenhouse gas emissions – and this applies to all materials used in modern technology. The key, then, is to make sure that e-waste is being disposed of in a responsible manner – so what are some ways for business to do so?

Planet Ark is one of the foremost promoters of recycling for all sectors of society, and they run a fantastic website called Business Recycling devoted specifically to making it easy to manage your waste at work. Generally speaking, the most direct way to dispose of your business’s e-waste is to drop it off at a council facility in your local area; Planet Ark has another website which you can use to find nearby recycling centres. If your local centre is a pretty long hike away, you can always look up when your council’s next kerbside collection day is, and leave your e-waste out on that day – they’ll recycle it for you with no more work on your part. Both of these methods work well for bulk amounts of waste, but there are also ways to recycle individual items as you go along; Mobile Muster is an industry-run recycling program for old mobile handsets, which allows you to pick a reply-paid satchel and post your mobile phone to them for recycling.

The amount of e-waste in Australia is a growing problem, but if homes and business take a few simple measures to recycle their e-waste properly, it’ll make a world of difference to both the environment and the economy. Start recycling your e-waste today!