If Google was a god, what form would it take? Because, in the world according to Amazon Prime Video show American Gods, I could be responsible for unleashing unto the world a new deity personifying the rainbow-logoed search engine monolith, writes Amanda Horswill.

You see, the laws of nature in this bizarre but addictive polytheistic fantasy series is that man creates the gods they need at the time. I don’t just mean the ideological constructs that rely on blind faith – these gods are real-as-the-nose-on-your-face types who walk the Earth among the mortals who spawned them. The show is based on the book by Neil Gaiman.

So, if Gaiman’s rulebook played out in this life, Google would be a top-bun-wearing, gender-neutral hipster with a penchant for Top Deck Freddo Frogs and citrus fruit, who would call his homeland a small rectangle of dustless space on the windowsill behind my workstation. For it’s there I have set up a little shrine to Google, so I can make offerings to try and convince the all-powerful deity that is Google. Under it I leave offerings of untouched chocolate and unpeeled mandarins before I hit “publish”. It’s the 2019 content creation equivalent of virgin Aztecan blood sacrifices made to ensure a good harvest, without the gore.

In the world of American Gods, religions and gods are created by cultural group as they progressively immigrated to America. First, it was the Vikings, who brought their rather grumpy Odin (Ian McShane) – the All Father, to whom they sacrificed their eyes and their shipmates to in order to escape what they considered to be hell on earth. Then came the African trickster god Anasi (Orlando Jones), as well as Irish Leprechaun King Mad Sweeney (show-stealing Pablo Schreiber), Bilquis (Yetide Badaki) – the god of love or lust, depending on your point of view, and a pantheon of other “Old Gods”.

But then along came technology, which brewed the New Gods – money, media, celebrity, drugs … and of course these worship disruptors start sucking in all the adoration, leaving the Old Gods to languish in the dark and die out, one by one. Not content to go quietly into that fading light, Odin – Mr Wednesday as he is now known in modern times – decides to start a war and win back the prayers of the faithless masses. 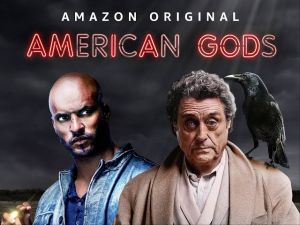 Season one scored two Emmy nominations and a very respectable 92% critic rating and 84% audience rating on Rotten Tomatoes, as it traced the trajectory of Odin’s chosen knight Shadow Moon (Ricky White), an ex-con whose wife Laura (Australian Emily Browning) was killed in a car crash but then comes back from the dead thanks to a very, very lucky coin which was once owned by Mad Sweeney. Shadow has to grapple with his grief, then the realisation that his wife is now – for all intents and purposes – a walking, talking, adulterous corpse, and that there is much more to this life than his two-dimensional understanding. As Odin rallies his war council of Old Gods, he has to fend off attacks by the motley crew that are the New Gods (including New Media, played by Gillian Anderson).

However, season two, now screening on Prime Video, hasn’t fared so well: a 60% critic rating and a 65% audience rating. It suffers from the one thing that makes modern warfare boring (but, let’s face it, a lot better than the alternative) – too much politics, not enough action. Perhaps the season was designed to delay the actual war long enough to make sure there was a third season, which has been confirmed as being in production right now.

Which is just as well, because this year’s offering certainly poses more questions than it answers. It’s clear the production was beset by the evils of off-screen politics, too. Three showrunners lost their scalps in the process, and there were rumours of creative differences with Gaiman, and it shows. The plot is turgid, and folds back on itself, twisting like the metaphorical snake in the Garden of Eden. The one shining light is perhaps the individual performances of some of the cast, and the sweet Mad Sweeney/Laura Moon arc.

Pack your bags, we’re going to Lakeside. Season 3 of #AmericanGods is officially in production! pic.twitter.com/SIvXFv3Zu2

Is season two worth watching?

For the sake of review, and because I’d need another 43TB and four weeks of therapy to explain the story, this is the outline of what transpires: Odin stuffs around, gets people killed and doesn’t really act like a general. I hate him. I don’t care if he wins at this stage. And I don’t want that god in my pantheon, thank you very much.

Shadow Moon wanders around like an idiot, trying to work it all out, but between flashes of brilliance, he basically does nothing except kill one of the best characters in the entire show. Laura Moon is dead, then kinda dead, loves Shadow but then kinda doesn’t, then kinda crushes on Sweeney, and they kinda do the do, but do they? She keeps the lucky coin in her chest, even though if anyone else was writing the darn script she would have whipped it out by now and handed it to her new love so that he wouldn’t be so dead.

Mad Sweeney is revealed as a noble king gone mad, who was once married but lost it all. He crushes so hard on Laura, but he thinks she’s in love with Shadow, and then he’s wrecked when they kinda do-the-do thanks to voodoo-induced tripping, after which he becomes a drunk, starts remembering his crappy past, grows a backbone and tries to take out Odin, but is killed by Shadow instead. A bunch of other characters do stuff but it’s really immaterial, except for the super-lovely love story between human Salim and the Jin god whose eyes are permanently on fire.

The New Gods are all stupid and I don’t really understand what they did anyway – something about evil technology watching us all, fakeness, hacking, (blah, blah, yawn, mumble, mumble, mumble). Oh, and best supporting actor goes to the lycra suit Technical Boy (Bruce Langley) wears, which is embroidered with LED lights. V cool.

Roll on season three. Now I’ve sat through season two, I need a payoff. If Mad Sweeney is not in the first ep, I’m giving up.