It’s been over a year since NYC titans Axe and Chuck last graced our screens. It’s been tough, but somehow, we made it (give yourselves a round of applause). Thankfully (and we truly mean it when we say that!) the wait is finally over. That’s right, season five of the critically acclaimed, financial drama Billions is arriving on Stan on May 3 – and the timing couldn’t be better. 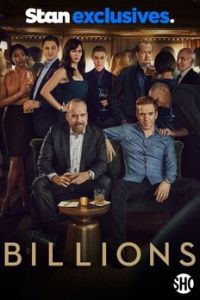 Everyone loves a good cat-and-mouse chase: Killing Eve’s Villanelle and Eve, Sherlock’s Moriarty and Sherlock, and now Billions’ Bobby “Axe” Axelrod and Chuck Rhoades. The premise is simple – two powerful, (usually) pretentious and superior yet complex characters become obsessed with each other, one usually running from the other (or are they both running towards each other?) to find answers.

The chase in question here is between multi-billionaire hedge fund king and owner of Axe Capital, Axe (played by Golden Globe and Emmy award winner Damian Lewis) and the U.S. Attorney trying to take him down, Chuck Rhoades (played by Emmy and Globe winner and Oscar nominee Paul Giamatti). We’ve seen a lot of twists and turns from both characters over previous seasons, with season five looking to bring even more with it.

After a brief (it was always going to be) stint as BFFs to get vengeance on Taylor Mason (Asia Kate Dillion), Axe and Chuck are back to the way they (and we) like it best – rivals. But the world of New York finance isn’t a kind one and the pair need to watch their backs. Especially because there are some new arrivals – House of Cards’ Corey Stoll and Roma Maffia – who could turn out to be enemies lurking beneath the surface. Stoll plays ‘social impact pioneer’ Mike Prince, who poses as a major threat to Axe’s Top Dog status, while Maffia plays the ‘formidable district attorney’ feuding with Chuck.

But not all new additions appear bad – The Good Wife’s Julianna Margulies is set to appear throughout the season as a love interest for Chuck (ooh, la la), a professor he meets at Yale.

Taylor is also set to play an even bigger part this season – they are one of the only characters to sneak behind both Axe and Chuck’s enemies’ lines, after all. In the teaser trailer, Axe simply states to Taylor: “I want you on my side.” In true Billions fashion, Chuck isn’t having a bar of it, asking Taylor: “I want you to help me take him down, once and for all.”

Their answer? “Would I do absolutely anything to survive? Yes.” It’s not giving us much, but it sure is getting us excited. Could Taylor be the one to help Chuck seal Axe’s fate? Or with Taylor on his side, could Axe grow more powerful than ever? Only time will tell – and when we say time, we mean May 3, when the first episode of Billions season five is released on Stan, direct from the U.S.

Don’t have a Disney+ account yet? Need your Star Wars fix? There are two plan options to choose from – a monthly subscription at just $8.99 per month, or prepay for a whole year at $89.99 and save on the monthly cost. Both plans include the same features, with unlimited downloads and the ability to stream on up to four screens at the same time. This table includes links to a referral partner.