Would you put your entire life in the hands of advanced technology in exchange for eternal happiness? While we can’t entirely trust the process, the civilians of New London in dystopian series Brave New World certainly do.

Based on Aldous Huxley’s 1932 groundbreaking novel of the very same name, the nine-part series will be premiering in Australia exclusively on Stan on October 16 after the platform secured a landmark deal with NBCUniversal.

Starring the likes of Jessica Brown Findlay, Demi Moore, Alden Ehrenreich and Harry Lloyd, it’s looking like New London may be hard to resist. The future is bright, it’s very scary, and it’s all yours on October 16 – only on Stan.

What is Brave New World?

Based on Aldous Huxley’s 1932 novel Brave New World, the series is set 600 years in the future where a utopian society in England named ‘New London’ has achieved permanent happiness, peace and stability. The catch? Everyone is connected through the compulsory mind-controlling drug ‘Soma’, babies are made in test tubes due to a monogamy and pregnancy ban, and you can say goodbye to your own money, privacy and remembering your family and the history of life itself. You still in?

The drama all starts to kick-off when two citizens of New London, Bernard Marz (Lloyd) and Lenina Crowne (Brown Findlay) step outside of their comfort zone and leave for the ‘Savage Lands’ – a place of rebellion and violence. It’s here, where they meet ‘John the Savage’ (Ehrenreich) who they bring back to New London to show him a life of ‘eternal happiness’. But as the only person of the new world born naturally from a mother, John’s presence will disrupt New London and inevitably change the course of their society forever.

Brave New World marks the first Peacock Original Series – NBC’s streaming platform – to premiere anywhere in Australia. It’s all thanks to a recent deal struck between NBCUniversal and Stan, which means we could be seeing more Peacock Original’s in the future.

Who stars in Brave New World? 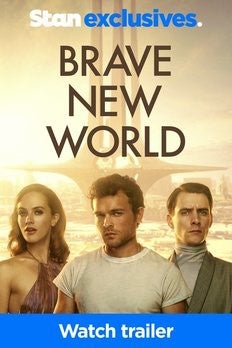 It’s a star-studded line-up. Downton Abbey’s Jessica Brown Findlay and Game of Thrones’ Harry Lloyd star as the OG New London citizens, alongside Alden Ehrenreich, who you may recognise as Han Solo in the 2018 Solo: A Star Wars Story. The timeless Demi Moore stars as Ehrenreich’s mother, as well as Joseph Morgan from The Vampire Diaries and The Originals’ and Kylie Bunbury from Netflix’s When They See Us.

How dangerous can it be to let the government regulate happiness? Find out when Brave New World premieres on Stan on October 16.