George Clooney has decided to bless our small screens by returning to television for the first time in ten years – his last appearance being in medical drama ER. His latest endeavour is ‘Catch-22’ – an adaption of Joseph Heller’s satirical 1961 novel of the same name. Due for release on May 18 on Stan, the war comedy-drama, or ‘dramedy’, promises to breathe life, and a fresh perspective, into an age-old tale. 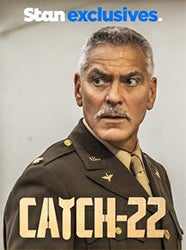 John Yossarian, a US Air Force bombardier whose mental state is deteriorating the longer he remains in the war. Volunteering as a U.S. bomber in the hope that his lengthy training would see him escape the war, Yossarian is frustrated to find himself behind the cockpit more than he deems necessary after his own army, led by vindictive commanding officer Colonel Cathcart (Kyle Chandler), keeps increasing the number of missions men must fly before they can be relieved.

Pleading insanity begins to become his only choice, yet he is trapped in a ‘catch-22’ – the original novel’s signature paradox. Basically, the US army makes it impossible for any pilots to be exempt from bombing missions on the grounds of insanity, because in their eyes, anyone who applies for an exemption must be sane – a catch-22.

Who else is involved?

Clooney not only stars alongside lead Christopher Abbott, but he also co-directs and co-produces the show alongside Grant Heslov, who has previously worked beside Clooney on Subrubicon and The Monuments Men. Other cast members include Hugh Laurie (House), Jon Rudnitsky, Pico Alexander, Giancarlo Giannini and newcomer Harrison Osterfield.

Despite a show of predominately male characters, Tesse Ferrer (Grey’s Anatomy) plays a ‘complex and interesting’ female character who Clooney and producers worked hard to rework and steer as far as possible away from the novel’s original sexist portrayal of her. The reboot was also written by two Aussies, Luke Davies (Lion) and David Michod (Animal Kingdom) – so we can trust it will be good.

Catch-22 reports for duty on May 18, only on Stan, just in time for your next weekend binge.