It’s been a long year; Game of Thrones officially ended in 2019, and our television screens have never quite been the same. For those of you missing your dose of Jon Snow, you’ll be pleased to hear that actor Kit Harington is leading the line-up in the second (strictly British) season of the Netflix interrogation show, Criminal, in his first major TV appearance since Thrones wrapped up. Catch Kit starring alongside The Big Bang Theory’s Kunal Nayyar and a few more familiar British faces in Criminal: UK when it lands on Netflix on September 16.

What is Criminal: UK? 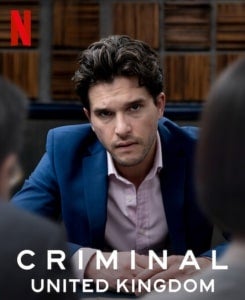 Following the first season of the critically acclaimed multi-language crime anthology Criminal, which featured actors such as David Tenant and Hayley Atwell in 12 episodes across four European countries, Criminal: UK follows just four cases across, you guessed it, the UK. Set entirely within the confides of a police interrogation room between officers and four different prime suspects (one per episode), the show explores the relationships that take place between the police and ‘the other side’ like you’ve never seen it before. Covering topics such as murder, rape and online grooming, Criminal: UK can be pretty hard-hitting—but is too brilliant to look away.

Netflix states: “It’s one room that changes everything. Prepare for bold stories, some surprises, and a completely innovative take on the police procedural.”

Who stars in Criminal?

Arguably the biggest name, Kit Harington follows in Tenant’s footsteps as one of the suspects being interrogated. Playing a posh bigshot named Alex, his character is accused of rape. Following Harington is Kunal Nayyar, best known for playing Raj on The Big Bang Theory, who plays an inmate named Sandeep attempting to negotiate his sentence.

Not too be forgotten is Sharon Horgan (you may recognise her from her comedy series Catastrophe) playing a mother who hunts online predators and Sophie Okenedo as the wife to a murderous strangler. Of course, the OG police team from season one still remains, and all three actors consequently return to reprise their roles; Katherine Kelly, Lee Ingleby and Rochenda Sandall.

Spend some time locked in a room with Jon Snow as Criminal: UK lands on Netflix on September 16.