Name a better group of mammals: Meghan Markel, Shani the elephant, Natalie Portman, and Echo the bottlenose dolphin. The four of them (plus honorary mammal Steve the penguin) are coming together to celebrate Earth Month on Disney+ through the release of three ‘Disneynature’ feature films – the new Elephant and Dolphin Reef, as well as the 2019 Penguins. It’s bizarre, but hey – so are the times we’re living in right now.

All three Disneynature films will be hitting Disney+ on April 3, so get a taste of what to expect below. 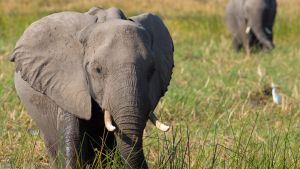 Meghan Markle is back in her first industry gig post-Royal, and despite the wrap she gets, we are totally here for it. Markle is the narrator of Elephant, a Disneynature film following Shani the African elephant and her son Jomo, and their treacherous journey through the Kalahari Desert.

“Led by their great matriarch, Gaia, the family faces brutal heat, dwindling resources and persistent predators, as they follow in their ancestor’s footsteps on a quest to reach a lush, green paradise,” states Disney.

Directed by Mark Linfield, the film will support Elephants Without Borders, an organisation working in Botswana to protect and conserve the elephant population.

Academy-award winner Natalie Portman is lending her voice to Dolphin Reef – a film that takes a deep dive into the adorably engaging animal that is the dolphin. The film, directed by Keith Scholey (who also did Disneynature’s Bears) follows Echo, a young bottlenose who is struggling with his transition to adulthood and “can’t quite decide if it’s time to grow up and take on new responsibilities”.

We’ll say it again – adorable (and somehow relatable too).

Not a brand-new film, but many may have missed the chance to catch Penguins during its theatrical run in 2019, so here’s your chance! Narrated by the ever-funny Ed Helms (The Hangover), ‘Penguins’ follows Steve – a gentleman looking for love who likes “long walks on the beach, fishing and collecting rocks”. After finding his perfect match, Steve must adapt to becoming a father, protecting his children from the harsh environment they live in.

If you’re hooked on Disneynature, you don’t have to look too far for your fix. The Earth Month collection will also include three more titles dropping on April 3 – In the Footsteps of Elephant, A Life on the Edge, and Diving with Dolphins, which take viewers on a behind-the-scenes tour of each individual film process and filming.

Also check out Disney+’s growing list of nature content – which will be highlighted throughout Earth Month – such as National Geographic’s America’s National Parks, Wild Yellowstone, The Flood, JANE, Sea of Hope: America’s Underwater Treasures and many more.