If you’re anything like us, you’ve been desperately trying (and failing) to fill the Sex and the City­ shaped hole in your heart ever since the show wrapped up. It’s been far too long since we’ve seen the likes of Carrie and the girls gossiping at brunch and stomping down the streets of New York City in anything but midnight re-runs. Thankfully, the brain behind SATC (and the drama Younger) Darren Star has heard our pleas. The result? A modern-day SATC starring Lily Collins as a young marketing executive, Emily, who unexpectedly scores her dream job in Paris. Appropriately called Emily in Paris, it touches down on Netflix on October 2.

What is Emily in Paris about? 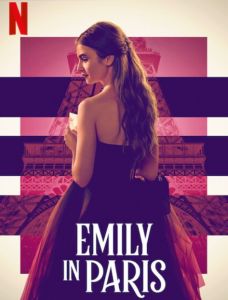 Lily Collins (Love, Rosie, Mirror Mirror, Extremely Wicked, Shockingly Evil and Vile) stars as our lead Emily Cooper, an ambitious 20-something marketing executive from Chicago. When her company suddenly acquires a luxury French company as a client, Emily is offered the opportunity of a lifetime to work as their American social media and marketing manager, and the best part? The job is in Paris. Dropping everything for a new adventure (I mean, who wouldn’t?) Emily is forced to quickly adjust to life in a foreign city full of demanding colleagues, stressful clients and a whole lot of hustling.

But there’s also exciting new friendships, clothes that scream the French (Star has recruited ex-colleague and SATC groundbreaking stylist/god Patricia Field again, and it shows) and maybe even some French boys. We have never been so ready.

Who else stars in Emily in Paris?

Lily Collins may star as the lead in the 10-episode comedy-drama, but there’s also an array of both well-know and up-and-coming actors featured, too. Joining Collins are Grey’s Anatomy’s Kate Walsh and Broadway star Ashley Park, as well as French actors Lucas Bravo, Samuel Arnold, Philippine Leroy Beaulieu, Camille Razat and Bruno Gouery, giving us plenty to look forward to.

Catch flights (and maybe some feelings too) when Emily in Paris lands on Netflix on October 2.