It’s officially October, which can only mean one thing: spooky season has started. And what better way to kick things off than the highly anticipated second instalment of ‘The Haunting’ anthology series, The Haunting House of Bly Manor. Based on the ghost stories of Henry James, Bly Manor is a whole new house with a whole new set of characters — and maybe a few familiar faces. Spook yourself silly when the entire series of Bly Manor drops on Netflix on October 9.

What is The Haunting House of Bly Manor? 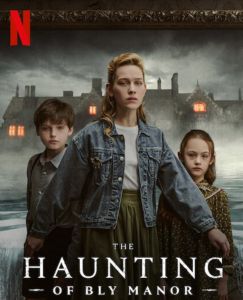 The Haunting of Hill House was one of Netflix’s most successful originals of 2018, adapting Shirley Jackson’s iconic horror novel of the same name. The 10-epsiode series left fans wanting more, and creator Mike Flanagan and producer Trevor Macy were listening, teaming up for round two with The Haunting House of Bly Manor, which is based off Henry James’ The Turn of the Screw and stars the breakout star of Haunting Hill, Victoria Pedretti.

Of course, this is a horror show (even the trailer scared us) and we’re guessing the job isn’t going to be a walk in the park. According to Netflix, “All is not as it seems at the manor, and centuries of dark secrets of love and loss are waiting to be unearthed in this chilling gothic romance. At Bly Manor, dead doesn’t mean gone.”

Lock your doors and keep the lights on, The Haunting House of Bly Manor drops on Netflix on October 9.