Alright, listen up team. What do you get when you cross BoJack Horseman, New Girl and The Last Dance? Of course, it’s Netflix’s hilarious new adult cartoon, Hoops, starring Jack Johnson (the lovable Nick Miller on New Girl) as a grumpy, hot-headed high school basketball coach who’s determined to make the ‘big leagues’ — if only he can whip his losing team of misfits into winners.

Created by Ben Hoffman, Phil Lord and Chris Miller, Hoops is the comedic relief we all need right about now. Grab a courtside seat and get ready for tipoff as Hoops arrives on Netflix on August 21. 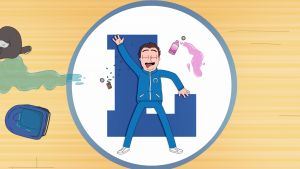 What can we expect from Hoops?

Coach Ben Hopkins (Johnson) is the star of the show; a pathetic, angry man desperate to succeed without putting in any work. Ben coaches a group of misfit high school basketball players (unsuccessfully) and is unhappy with where his life has ended up. So far, all we’ve got to go off is Netflix’s minute-long teaser, which shows Johnson’s somewhat useless character attempt to land a shot while his dumbfounded team watch on. There’s also a hell of a lot of swearing going on, so it’s safe to assume this cartoon is not for young children — hopping on the new trend of adult ‘toon popularity.

Who else stars in Hoops?

Alongside Johnson and his group of ballers, there are some pretty big comedic names attached to the project. Actor and comedian Rob Riggle (21 Jump Street, Step Brothers) stars as Barry’s father, a former pro-athlete who doesn’t respect Hopkins. Comedian Natasha Leggero also stars as Shannon, Hopkin’s estranged wife who has a history of making rash and impulsive decisions, but is currently working to better her life and work on her horse farm (bizarre). And finally, Ron Funches plays Ron, Ben’s assistant coach and best friend who is Ben’s polar opposite: kind, considering and patient.

There’s also some pretty great news for New Girl fans — Jake Johnson is getting the gang back together, with guest appearances from Max Greenfield (who played Schmidt), Hannah Simone (Cece) and Damon Wayans Jr. (Coach).

Sounds to us like Hoops has all the ingredients for a slam dunk. Catch it on Netflix on August 21.