Sick of waiting for the fourth season of Stranger Things? Don’t know what to do with yourself now that The End of the F***ing World is over? Never fear – from the people who brought you both smash hits comes a new superhero comedy to Netflix, I Am Not Okay With This. Oh – and it stars the IT kids, Sophia Lillis and Wyatt Oleff. We are definitely Okay With This.

What is ‘I Am Not Okay With This’?

Netflix has seen roaring success with four different things; coming-of-age angst, teenagers with superpowers, young love, and the artistic collaboration between graphic novelist Charles Forsman and director Jonathan Entwistle. The streaming giant appears to have another success story on their hands with the upcoming I Am Not Okay With This series – a delightful combination of all four ingredients.

The show, which has been described as a ‘superhero angst comedy’ is based on the graphic novel of the same name by Forsman, author of Netflix’s surprise 2017 hit The End of the F***ing World (directed by Entwistle). I Am Not Okay With This is an all-star mix of talent – the producers of Stranger Things, Sophia Lillis and her IT costar Wyatt Oleff as leads and a Forsman and Entwistle combo. 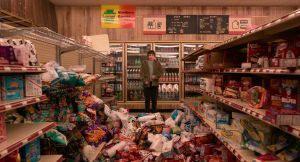 The origin story follows the awkward and moody teenager Sydney (Lillis) who’s got her hands full balancing high school, multiple desperate crushes, grief and hating her life. All she wants to do is keep her head down and maybe fall in love, but something major is standing in her way – these pesky telekinesis superpowers.

Whilst most teens would be ecstatic to realise they’re the most powerful kid in the schoolyard, Sydney views them as a bit of a burden. The premise, says Entwistle, is what he calls the Teen Wolf effect – aka, superpowers in the most inopportune moments. He stated: “Very much for us, Season 1 is ‘I have to get to math class but I can’t, I just blew down a wall.”

The trailer shows Sydney in constant denial, even describing a road sign she propels in the air with her mind (and a small rock) as “probably just puberty”. Uh oh, if the opening Carrie-esque scene to the trailer is anything to go by, we have a feeling that Sydney is in for a ride a little bit more traumatic than just puberty.

Catch I Am Not Okay With This when the entire series drops on Netflix on February 26.

Don’t have a Disney+ account yet? There are two plan options to choose from – a monthly subscription at $8.99 per month, or prepay for a year at $89.99 and save on the monthly cost. Both plans include the same features, with unlimited downloads and the ability to stream on up to four screens at the same time. This table includes links to a referral partner.