If you’re a fan of the bizarre worlds created by the Academy Award winner and writer/director Charlie Kaufman, chances are you’ve been counting down the days until his new psychological horror flick, I’m Thinking of Ending Things, hits Netflix. Thankfully, you don’t have much longer to go, with the movie premiering on September 4, and if you’re not a fan, you’re about to be.

What is I’m Thinking of Ending Things?

Inspired by Ian Reid’s best-selling novel of the same name, I’m Thinking of Ending Things follows a young woman (Jessie Buckley) with no fixed name who is feeling claustrophobic in her relationship with her new boyfriend Jake (Jesse Plemons) and thinking of, well, ending things. Despite her questionings, she agrees to a road trip with him to his home-town family farm. Trapped in a snowstorm upon their arrival, she is forced to spend some real quality time with Jake and his parents (Toni Collette and David Thewlis) and, as a result, begins to question her true identity and everything she knows about the world. The movie follows Kaufman’s well-known ambiguous style of writing and directing (made famous in Eternal Sunshine of the Spotless Mind and Adaption) and according to Netflix, is an “exploration of regret, longing and the fragility of the human spirit”. 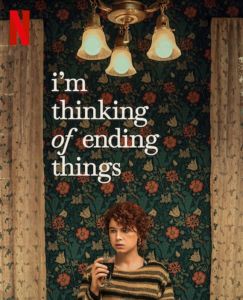 Who else stars in I’m Thinking of Ending Things?

Alongside Charlie Kaufman, who wrote, directed and produced the film, there’s a pretty stellar line-up of names. Jessie Buckley leads the film, who you may recognise from the HBO miniseries Chernobyl or the BAFTA-nominated film Wild Rose. Alongside her stars Jesse Plemons, who has featured in his fair share of award-winning television and movies, from Breaking Bad to Fargo. Of course, we all know the home-grown Toni Collette, who plays Jake’s mother, with David Thewlis – aka Harry Potter’s very own Remus Lupin – playing Jake’s father.

It looks to be quite a ride, but we’re ready for this. Catch I’m Thinking of Ending Things when it drops on Netflix on September 4.