Jack Ryan is the U.S. answer to James Bond (minus the martinis and misogyny). He came all guns blazing to our screens on Amazon Prime Video in season one, when he transformed from a desk-bound CIA financial analyst to an eagle-eye, sharp-shooting, no-prisoners-taken field officer. He’s back for season two, this time helping to save an entire country from itself.

Jack, played by the very tall and very handsome John Krasinski (The Office, The Quiet Place), is a former soldier who has a PhD in Economics who must surely be the modern antithesis of the phrase ‘the pen is mightier than the sword’. The phrase should really be made over for the new millennia: The data is (not) mightier than the M240 machine gun, maybe? A million spy satellites, the entire force of the U.S. military plus a crack team of really smart agents is mightier than someone who doesn’t want to have a democratic election? Mmm, it’s a close call, but season two of Jack Ryan aims to find out.

What’s Jack Ryan up to in season two?

In this series, Dr Ryan is on the trail of a dodgy shipment of what he thinks may be parts to some diabolical weapon, which arrives in an equally dodgy port in Venezuela. Unbeknownst to our hero, his old mate James Greer (Wendell Pearce) – whom we met in season one as a cranky field operative chief who becomes kinda-buds with our hero – is also looking into the dodgy ship that carried the dodgy parts to the dodgy port, but from his dodgy posting in Moscow. Crankier-than-ever Greer has developed a heart condition, which causes him to collapse while on the job, where he decides that he needs to be transferred to Venezuela instead of going straight to hospital, as you do when you have a hero complex, apparently.

Meanwhile, Jack is already in the South American country, trying to get answers from the shady head of government, Nicolás Reyes (Jordi Molla), acting as an aide to U.S. Senator Mitchell Chapin. The Senator is one of Jack’s former Army buddies, and his best friend, who sat by Jack’s bedside when he was all but blown apart by an IED in the Middle East.

By “chance” – which in CIA terms means at the end of an orchestrated, Machevellian-style operation – Greer and Jack finally meet up and “discover” they are looking for the same thing. Afterwards, Jack catches the eye of a hotel guest, but it’s not hard to tell she is there for more covert reasons (mainly because this woman is played by Noomi Rapace, of The Girl with the Dragon Tattoo and Prometheus fame).

But then the next day, the proverbial diplomacy hits the fan, and the U.S. delegates’ armoured car convoy is ambushed. Jack finds his best friend, the Senator, badly injured, and tries to save him. But the explosion was just a way to get the Americans out of their cars so a sniper – ex-German spy Max Schenkel (devilishly played by Tom Wlaschiha, the nameless assassin Jaquen H’ghar from Game of Thrones) – can finish them off. Chapin is shot, and Jack is distraught, Greer almost dies chasing the faceless assassin down the streets of Kings Landing… hang on, sorry, wrong show.

With his passions twice thus aroused, Jack goes on a warpath to avenge his best friend, and ends up threatening the “democratically” elected ruler of Venezuela. That, of course, puts our hero on the assassin’s most wanted list, and Jack, Greer and their band of hangers-on play cat-and-mouse while trying to work out what the heck was in those ships in the first place (remember them?). 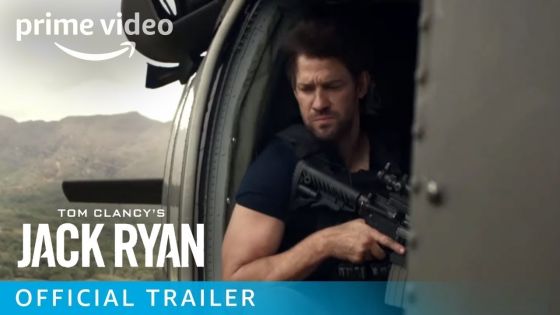 Running alongside this saga is another, almost separate tale interwoven with the U.S.-saves-the-world drama. It’s of an unravelling Venezuela, during the run-up to an election that could see the increasingly-ruthless Reyes ousted. Pro-democracy candidate Gloria Bonalde is whipping up public sentiment against Reyes, by pointing out to the people that even though the country is the richest in terms of natural resources, it’s actually home to some of the poorest people on the planet. To me, this part of the story jarred with the “U.S. against the world” ethos of the rest of the season. The scenes were a little too long and passionless to be effective in this action-hero genre. The scenes, maybe, were designed to soften the gung-ho U.S. attack, but at times it was … something not that. Condescending, perhaps? Too much Western privilege, maybe?

Is Jack Ryan season two worth a watch? Yes, if you like political intrigue mixed with spy moves mixed with jungle warfare mixed with America saving the day. It’s bordering on bingeable, maybe requiring a bit of fast-forwarding occasionally. But don’t expect the fast-paced, compelling watch that the first season delivered. It could be just a cast of “season-two-itis”. Let’s hope so, because John Krasinski’s version of a smart, but fallible, international spy, who doesn’t like his women for martini-shaken-not-stirred decoration, has been a long time coming, and with season three greenlit, we may see Ryan closer to human than superhuman.

Paramount+: Everything you need to know