I think it’s universally agreed that Paul Rudd is yummy. OK, so “yummy” is not really a reviewer-esque term (unless you are a food critic, I suppose) – and it’s objectifying the Ant Man actor in a base way, I concede. But he is. Sorry Paul, but you are. (Does it count if I think his brain is attractive too?). There’s a reason I make that creepy point – there’s a moment in his new comedy/tragidrama Living With Yourself freshly released on Netflix that is so surprisingly un-Paul Rudd that my stunned consciousness couldn’t process, writes Amanda Horswill.

I had to pause – think – rewind – watch – reprogram my preconceptions about five times before the new reality hit me: Paul Rudd – you hide your raw-horror-legit-serial-killer-acting chops under jokes and nice smiles and that never-ageing boy-face with the clear blue eyes. Paul, you need to play a bad boy. A REALLY bad boy. Or, are you, actually, a real bad boy, in real life, and you are just really, really good at acting, well, good? 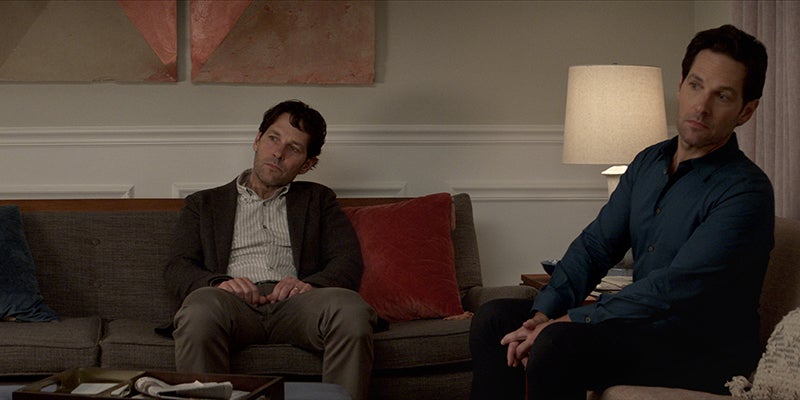 Living with Yourself should be called Living With Your (Instagram) Self

The premise of this new Netflix original series is Hitchock-esque (if Alfred was alive today, he’d be doing Black Mirror and this): Unhappy suburbanite Miles (Rudd) goes to a dodgy spa for what he thinks is a very expensive rejuvenating treatment but instead wakes up in a shallow grave. Wearing only an adult nappy, he stumbles home to find a Miles clone (also Rudd, plus a flotilla of CGI artists) living with his wife Kate, turning up at his crappy marketing job, visiting his estranged sister – and doing them all so much better. This Miles 2.0 is a shiny, happier, downright glowing version of the OG Miles. It’s as if someone’s Instagram account came to life and started competing against them for attention at the breakfast table.

The story is teased out by showing the events of each day from one Miles’ point of view, then the other. At first there’s the predictable shock, trying to get a refund from said dodgy spa/cloning clinic, and then the obligatory flirtation with murder.

But then OG Miles realises that there could be some benefits to having a spare overachieving self. Who wouldn’t want a clone to do the heavy lifting – and one that will smile while doing it? Miles 2.0 can go to work, while OG Miles stays home and finishes his life’s work – a play. OG Miles wants to strive for creative authenticity, which he feels in incompatible with his job at the agency, while Miles 2.0 can spin bulldust like silk, and actually enjoys interacting with other human beings. But there’s a strict rule – only the original Miles can go to bed with Kate. Miles 2.0 is happy enough with the deal – he is willing to live this half-life just to spend a few minutes each day with Kate.

But, as the clone Miles has exactly the same memories as the original version, it isn’t long before cracks start to appear in their arrangement. Miles 2.0 is doing a little too well, and OG Miles begins to feel edged out of his own life. Miles 2.0 misses intimacy and connection from the person he only knows as his wife, while Kate is wondering why her husband is the best version of himself one day, and a genuine troll the next. The forward narrative is interspersed with flashbacks, hinting how the original Miles came to be what he is now – a stubble-bearded shadow of his former, successful, happy, lovable, very-Miles 2.0-esque self.

However, there came a point where I just wanted to push pause, clone myself, become a fictional character, and hug OG Miles. Couldn’t anyone see that this was a man in the bear-claw grip that is depression? A low mood and feelings of hopelessness that persist for more than two weeks, with changes in levels of social activity, appetite, concentration and self-esteem that affect relationships with people closest to him?  “Kate,” I yelled at the screen, possibly more than once, “don’t berate him for being in one of his moods, where is your goddamn compassion! You say you love him, get the man some help!”

Paul Rudd plays the versions of Miles so convincingly, it’s uncanny. Just by slouching his shoulders a little, dropping his face, tilting his head, hooding those baby blues, ruffling up his hair, putting on tracksuit pants – and he’s original Miles, with a completely different energy to the tall-standing, tight-walking, head-up Miles 2.0. As I watched, I started to imagine what different versions of myself might be like, if my wellbeing was to be turned up or down. How much would it take to knock me into original Miles’ mood? How on earth do people like Miles 2.0 keep up that effortless facade all the time, and what would I be like if that was me?

And maybe this is where Living With Yourself is genius: presenting depression and mental illness in a totally subtle but determined way. Its triumph: throwing stealthy shade to the aggravating and ultimately pointless advice people suffering depression often report getting from do-gooders – “Why don’t you just be happy?” If he could, he just would. 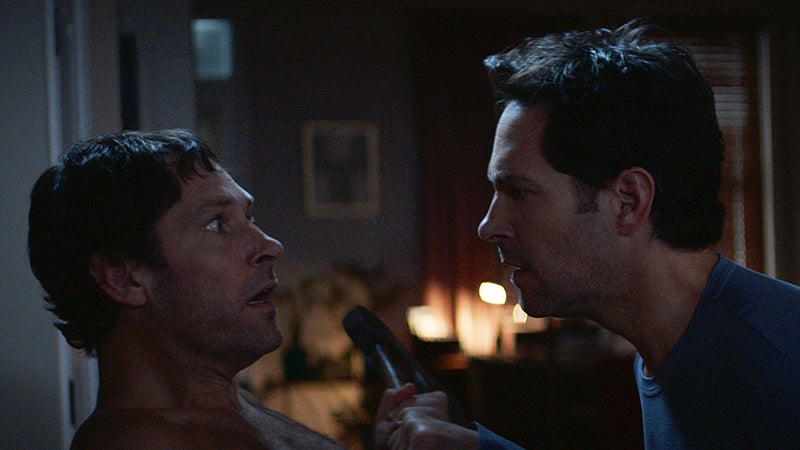 The story skims on the surface of surreal a few times, almost falling into ridiculousness, but is saved by the ever-present dark-but-with-heart performance from Rudd. Without giving too much away, there is an ultimate climax, where that anti-Rudd moment happens, and I was left wondering what on earth I would do in the same situation. What if there was an imposter, trying to muscle in on my life? What if I was the clone, and someone would let me live the only version that I knew of my life? That level of empathy with a story is no mean feat, particularly when – on the surface, anyway – Living With Yourself sets out to be just another, made-for-streaming, sci-fi love story. It’s not.