If you’re a Disney fan or a lover of Pixar movies, tonight’s your lucky night! Because of COVID-19’s impact on cinemas around the world, causing them to close and completely turn the movie business on its head, Disney and Pixar have decided to put their new movie Onward onto Disney+ early!

The movie was already able to be streamed on Disney+ in America earlier this month – at 5pm on April 3 – and according to the Disney+ app, the movie will go live in Australia sometime today, so it might be worth keeping 5pm ready for watching it.

What is Onward about?

Pixar loves playful ideas and giving things feelings – and this time it’s elves, set in a vibrant spin on the modern world. Onward is about two brothers, Ian and Barley, going on an adventure-filled quest to be with their father, encountering puzzles, maps and a van named Guinevere. It’s full of magic, peril and fun, and would be a great Friday night watch for the family.

The two leading roles are voiced by Tom Holland and Chris Pratt, who you might know from the Marvel Cinematic Universe, also available on Disney+, playing the roles of Spider-Man and Star Lord. 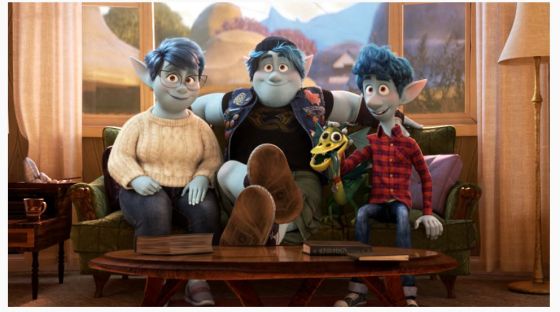 How can I watch it?

You’ll need to get on board with Disney+, the home of Disney’s collection of content from the studios it owns. You can find shows and movies from Disney, Pixar, Marvel, Star Wars and National Geographic there, along with stuff like The Simpsons.

It’s a great service with fun for the whole family. Here in the Canstar Blue office, we’re big fans of The Mandalorian, an action-packed show set within the Star Wars universe centred around a cunning bounty hunter and his unlikely companion, a child resembling the series’ famous character Yoda (lovingly referred to as “Baby Yoda”).

There’s lots to love with Disney+, and the shows aren’t going to stop. The Mandalorian is getting its own behind-the-scenes reprisal show on May the Fourth, right in time for Star Wars day! The streaming service has proven to be incredibly popular, already reaching 50 million users worldwide in just five months.

If you’re ready to check out Disney+, there are two plan options to choose from – a monthly subscription at $11.99 per month, or prepay for a year at $119.99 and save on the monthly cost. Both plans include the same features, with unlimited downloads and the ability to stream on up to four screens at the same time. This table includes links to a referral partner.