Ryan Murphy has completely lost the plot — and we are here for it. His latest Netflix movie, The Prom, looks completely manic: Meryl Streep is up to her old Mamma Mia tricks and is dancing on tables, James Cordon is a famous Broadway star, and Nicole Kidman is a struggling actor (please!). Only Murphy could unite a cast this talented for a movie this bizarre and get away with it. Sing and dance your way to prom when The Prom lands on Netflix on December 11.

What is The Prom about? 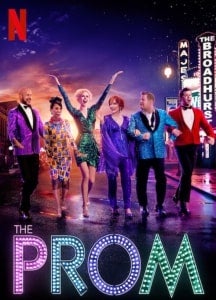 Meryl Streep and James Cordon star as Dee Dee Allen and Barry Glickman, New York City stage stars whose careers are heading for the garbage chute after their latest and highly expensive musical was a critical and commercial flop. While Meryl and Cordon lie around and mope, thousands of kilometres away a teenage girl is doing the exact same thing. Only, for high school student Emma Nolan (newcomer Jo Ellen Pellman), it’s because the head of PTA has banned her from attending prom with her girlfriend Alyssa (Ariana DeBose).

After catching wind of Emma and Alyssa’s story, Dee Dee and Barry decide that the girls’ are the perfect cause to resurrect their public images. The pair hit the road with struggling performers Angie (Kidman) and Trent (Andrew Rannell, The Boys in the Band) who are also looking for a “professional lift”. But, it’s no secret that the combination of a road trip, song and dance, and school proms are a deadly combination for fun (and re-discovering yourself).

Netflix states that: “When their self-absorbed celebrity activism unexpectedly backfires, the foursome find their own lives upended as they rally to give Emma a night where she can truly celebrate who she is.” What happens in Indiana, stays in Indiana (or, it makes it to Broadway stage).

An adaptation of Chad Beguelin, Bob Martin and Matthew Sklar’s award-winning, Tony-nominated Broadway musical, The Prom is a big-hearted, sing-out-loud film for the whole family on the power of love and song and dance. Catch it on Netflix on December 11.