If anyone could give us the warm and fuzzies right now, it’s the Fab Five. They’ve taught us how to love ourselves, how to properly go about self-care, and even the importance of the French tuck. Luckily for us, our favourite boys are back sooner than we thought – because season five of Queer Eye drops on Netflix on June 5. Grab a box of tissues and get ready to ugly cry as the Queer Eye boys transform the lives of those who need it most.

What is Queer Eye? 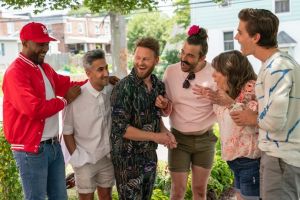 Just in case you’ve been living under a rock, let us give you a rundown before you embark on the ultimate feel-good binge. Queer Eye is a reboot of the classic early 2000’s Queer Eye for the Straight Guy. As the name implies, it’s basically five gay guys who are ‘experts’ in their field coming together to share their knowledge with clueless straight men who need it most. But in this modern day reboot, Queer Eye doesn’t just help the straight men of the world – they lend a hand to anyone and everyone, which you can relive on Netflix, with all previous four seasons available.

According to the trailer, there’s going to be a whole lot of tears (what’s new?) and a whole lot of amazing transformations. But instead of their usual New York stomping ground, the guys have made their way to Philadelphia to meet 10 new heroes – including a gay pastor, struggling mum and an extremely tall women held back by her insecurities.

They’ll be travelling far and wide across the City of Brotherly Love, and according to Netflix, they’ll be “forging relationships with men and women from a wide array of backgrounds and beliefs often contrary to their own, touching on everything from LGBTQ rights and social commentary to how to make the best farm-to-table guacamole”. Whatever they’re dealing with, we’re here for it.

The fun doesn’t end there…

If you know you’ll binge season five in a couple of days, never fear – because filming for season six has already started! In an Instagram post, the Fab Five confirmed they were in Texas filming for a sixth season, however dates for this are unconfirmed due to production halts as a result of COVID-19. Still, it’s enough for us to get doubly excited about season five and the new transformations in a new city.

They don’t call it the City of Brotherly Love for nothing. Check out the trailer before season five of Queer Eye drops on Netflix on June 5.