Everyone knows Sarah Paulson and Ryan Murphy are a TV match made in heaven. The creative relationship between the actress and the king of television has been entertaining us for years in six seasons of American Horror Story and American Crime Story. Now, fans of the two stars will be pleased to hear that they’re teaming up again in Ratched, a drama series coming to Netflix paying homage to the iconic villain Nurse Ratched from Jack Nicholson’s One Flew Over the Cuckoo’s Nest. Get ready to be freaked out when it drops on Netflix on September 18. 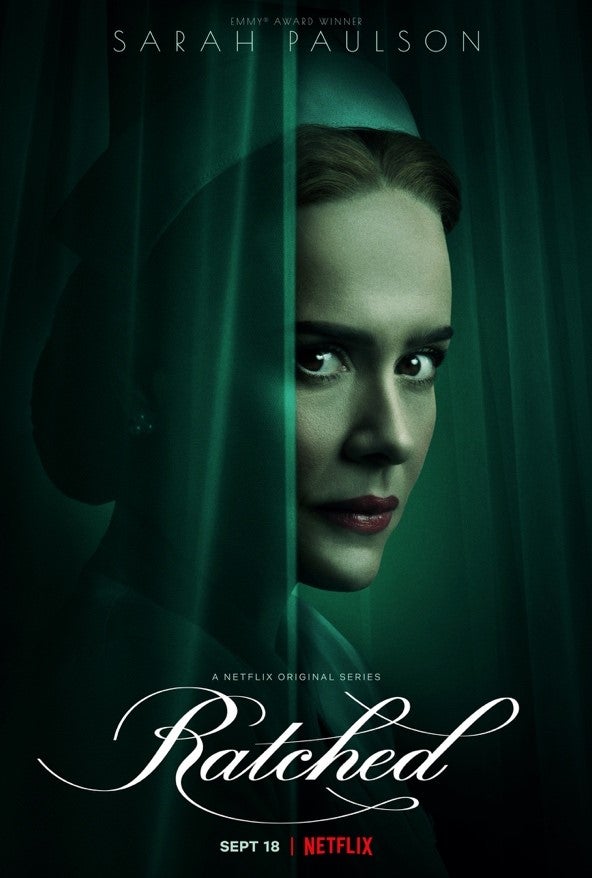 The show, which was created by Ryan Murphy and Ian Brennan, is said to be inspired by the “iconic and unforgettable character” of Nurse Ratched which was originally created by Evan Romansky in One Flew Over the Cuckoo’s Nest (starring Nicholson). Based roughly 15 years prior to the events of the award-winning 1975 film, Ratched tells the origin story of asylum nurse Mildred Ratched.

We catch the first glimpse of Paulson’s Mildred as she arrives in North Carolina in 1947 in pursuit of a job at one of the state’s leading psychiatric hospitals – also conveniently conducting some questionable experiments on the human brain. On somewhat of a clandestine mission, Mildred puts up a front as the perfect and dedicated nurse, but she’s clearly the furthest from it.

Netflix further explains that: “As she [Mildred] begins to infiltrate the mental health care system and those within it, her stylish exterior belies a growing darkness that has long been smouldering within, revealing that true monsters are made, not born.” It’s just classic Paulson x Murphy, isn’t it?

Who stars in Ratched?

Sarah Paulson isn’t the only star of Ratched – there’s a truck load of big names on the project, including Sharon Stone (Basic Instinct, Casino), the great Aussie Judy Davis, Cynthia Nixon (Sex and the City), Corey Stoll (House of Cards) and Amanda Plummer (The Hunger Games).

It’s also no secret that Ryan Murphy likes to re-cast actors he’s worked with in the past, and for Ratched it’s no different, with Jon Jon Briones (The Assassination of Gianni Versace, American Horror Story: Apocalypse), Finn Wittrock (American Horror Story) and Charlie Carver (The Boys in the Band) joining the cast. With a cast like that, you just can’t say no.

What better way to kick start the spooky season early than the entire series of Ratched when it drops on Netflix on September 18.