Desperately craving a new horror film to sink your teeth into? Maybe one that is produced by the ‘can-do-no-wrong’ Russo Brothers of the Marvel Cinematic Universe and Hollywood big-shot Jake Gyllenhaal? Maybe a horror film set in our own backyard of Melbourne? Then check out Relic, the new Stan Original horror flick coming to the Aussie streaming platform on July 10. 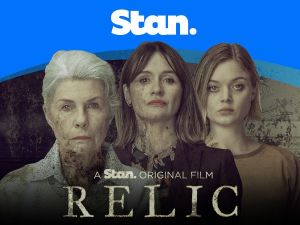 After Edna goes missing, Kay and Sam must travel back to their remote hometown to locate her. After doing so, the two women move in with Edna to take care of her in her deteriorating state. But, as they begin to make themselves at home, a disturbing presence begins to appear and take control of Edna.

Relic is not your typical horror film. Instead of oozing blood and scary creatures in the woods, the film is a psychological, relationship-based sort of horror – the horror of losing people you love to a terrible disease.

As described by Stan: “Relic serves as a deeply haunting metaphor for the ravages of Alzheimer’s disease.”

As well as the impressive all-female lead, Relic also boasts talent off-screen. The Russo Brothers, who often serve as directors on the Marvel Cinematic Universe films (Avengers: Endgame, Avengers: Infinity War to name a few), feature as executive producers alongside Jake Gyllenhaal, who also holds an impressive resume (e.g. Prisoners, Brokeback Mountain, Donnie Darko). Not only that, the feature film was the debut for Japanese-Australian female director Natalie Erika and was met with rave reviews at Sundance Film Festival.

We haven’t seen Relic yet, but we’re struggling to find ways to fault it. Catch the Stan Original from July 10.