Remember the name? If you’re a female over the age of 20, chances are you do. The Baby-Sitters Club is an iconic piece of 90’s nostalgia (both the best-selling book and the TV show) and, like all good things do, it’s making its way to Netflix for a reboot.

Alicia Silverstone stars alongside a sea of fresh faces as the beloved characters in the 10-part series which drops on Netflix on July 3.

What is The Baby-Sitters Club? 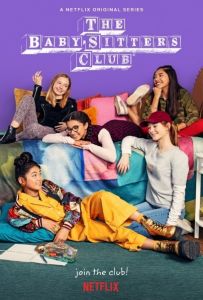 Based on the best-selling books by Ann M. Martin, The Baby-Sitters Club is the story of five middle-scholars – club president Kristy Thomas, the shy Mary-Anne Spier, fashionable and artsy Claudia Kishi, smart blonde Stacey McGill, and new girl Dawn Schafer who start their own baby-sitting business in their hometown of Stoneybrook, Connecticut.

The books were originally published between 1986 and 2000, and were ground-breaking for their time in that all five young girls were from different cultural backgrounds with different personalities, brought together by a business venture. After the first book was released, the series went on to make millions, and was adapted into a 13-episode TV series in 1990 and a film in 1995.

What can we expect from the adaption?

According to Netflix, the new Original series aims to take the original books and “continue to champion friendship, female empowerment and entrepreneurship”. The 10-episode series is led by showrunner Rach Shukert (Glow) and executive producer and director Lucia Aniello (Broad City), so we think it’s in pretty good hands. All five of the main cast are up-and-comers, so remember the names – Sophie Grace, Malia Baker, Momona Tamada, Shay Rudolph and Xochitl Gomez.

Clueless alumni Alicia Silverstone is an exciting addition, who plays the single mother to club president Kristy (Grace). Judging by the trailer (above), the series is set to closely follow their family in particular, as we see Silverstone announcing to Kristy her engagement to a new man (Mark Feuerstein), to which Kristy states she would rather “have headlice… again” than warm up to him.

Stream The Baby-Sitters Club on Netflix on July 3.