Netflix are well known for pulling in massive Hollywood names, but we think they’ve outdone themselves with their latest Original, The Devil All the Time. The trailer, which dropped mid-August, is their biggest flex to date and stars Tom Holland, Robert Pattinson, Bill Skarsgård and Sebastian Stan, just to name a few. Sure, we don’t really understand the plot, but we’re heavily invested already. The Devil All the Time drops exclusively on Netflix on September 16.

What is The Devil All the Time about?

Ah, it’s a question we’ve been asking ourselves as well. The trailer is pretty damn confusing (that Southern slang doesn’t help either) and basically it just made us very scared of the entire cast (besides Tom Holland of course, that boy can do no wrong).

The movie is, however, a loose adaption of the award-winning novel by Donald Ray Pollock of the same name — so if you’re dying for spoilers, take a sneak peek of that. But according to Netflix, this adaption turns the novel into an American psychological thriller, following Tom Holland’s character Arvin Russel, who is fighting to protect his loved ones against all kind of brutality, evil and corruption in his small town of Knockemstiff, Ohio.

Directed by Antonio Campos, the movie takes place between World War II and the Vietnam War, a “seductive and horrific landscape that pits the just against the corrupted”. It’s vague, it’s dark, and making us want more.

Who else stars in The Devil All the Time? 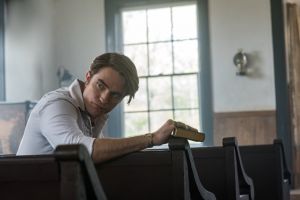 Alongside Holland, R-Patz stars as an ‘unholy preacher’, Sebastian Stan as a ‘crooked sheriff’ and Jason Clarke (Brotherhood) and Riley Keough (Logan Lucky) as a ‘twisted couple’ (they’re giving us massive ‘we are murderers’ vibes, tbh). Skarsgård appears to star in flashbacks as Holland’s father, and we also see Mia Wasikowska (Alice in Wonderland), Harry Melling (Dudley Dursley in the Harry Potters) and Haley Bennett (Swallow) in the trailer, with no doubt a few more familiar faces expected to pop up during the movie, so keep your eyes peeled.

Tune in to see all your fave stars play evil as The Devil All the Time premiers on Netflix on September 16.