Good news! Season four of everyone’s favourite afterlife sitcom The Good Place is about to land on Netflix. Bad news? It’s also going to be the show’s last season. Luckily for us, the final season is promising a perfect send-off, and victory lap, to what was one of the most surprising critically-acclaimed comedy series in television in recent years.

What is The Good Place? 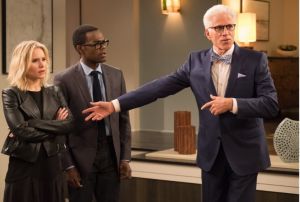 Kirsten Bell stars as Eleanor Shellstrop, a selfish and self-obsessed woman who wakes up one day and discovers her time on earth is over – and that she’s been mistakenly placed in the ‘Good Place’.

The Good Place is a heaven-like fantasy land created as a reward for humans who have lived a righteous life (in comparison to the ‘Bad Place’ where humans are sent if they don’t make the cut). The utopia is run by none other Ted Danson himself (or Michael in the show) – an immortal architect who (quite questionably) runs the Good Place neighborhood alongside his artificial intelligence robotic assistant Janet (D’Arcy Carden).

The Good Place follows the lives of four characters who have been placed in the Good Place; Eleanor, her ‘soul mate’ Chidi (William Jackson Harper), socialite Tahani (Jameela Jamil) and Tahani’s soul mate Jianyu Lia – a Buddhist monk who is secretly just a DJ from Florida named Jason (Manny Jacinto). Jason and Eleanor both believe they have been mistakenly placed, and confide in and enlist the help of Chidi to help them becoming worthy of the Good Place.

The Good Place was created by Michael Shur, who was previously a scriptwriter on The Office before co-creating Parks and Recreation and Brooklyn Nine-Nine (he is literally one hit show away from being knighted). Shur was the one who decided to end the show at four seasons, due to his pre-planned trajectory of the show.

In a statement released on The Good Place official Twitter, Shur stated: “At the end of the day we don’t want to tread water just because the water is so warm and pleasant.”

What can we expect from season four?

Spoiler alert – seriously, look away now if you haven’t seen the show yet. The season one finale dropped a massive plot twist, with Eleanor deducing that they were not in fact, at the Good Place. They were at the Bad Place (!!!). Yes, we were shocked too. Michael confirms that Eleanor was indeed correct and revealed his true intentions – he wanted all four to remain in the Bad Place and torture each other physically and emotionally for all of eternity. What the fork?

The second season sees Michael’s attempts (all 802 of them) to erase the core four’s memories and try the experiment again – yet time and time again they uncover the Bad Place. Eventually giving up, Michael agrees to help Team Cockroach (which now includes himself and Janet) get into the real Good Place.

The end of the second season, and the majority of the third, sees the gang back in the real world after Michael agrees to send them back with no memories of their time in the afterlife. In true Good Place style, Team Cockroach eventually reunite and Chidi theorises that he, Eleanor, Jason and Tahani were able to become better people in the Good Place than they were in earth due to the removal of external factors.

As a result, Michael decides to try a new experiment in a new Good Place with different human subjects – but those subjects all come with a nasty connection to each of the OG subjects, once being Chidi’s ex-girlfriend. This information prompts Chidi to have his memory in the afterlife wiped to save the experiment – but that also means all memory of him and Eleanor’s relationship. What will this mean for our all-time fave couple? We also saw Michael stepping down as architect and passing it on to Eleanor at the end of season. Was this really the best idea?

Only time will tell as you step back into The Good – or should we say Bad – Place one more time as the entire final season becomes available for streaming on Netflix on September 27.