If there’s one thing Disney is renowned for, it’s heart-warming animal movies that will bring you to tears. Just when we thought we’d seen it all (The Shaggy Dog, anyone?), Disney has gone and one-upped themselves with their brand-new original movie The One and Only Ivan.

Starring Bryan Cranston, Angelina Jolie, Danny DeVito and narrated by Sam Rockwell as the voice of the silverback gorilla Ivan, The One and Only Ivan is an unforgettable tale of friendship, family and the power of visualisation. Swing into the action when the true story of Ivan premiers on Disney+ on August 21.

What is The One and Only Ivan? 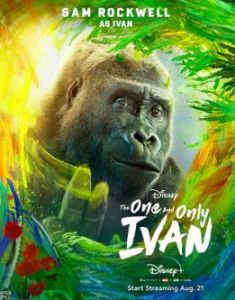 Produced by Angelina Jolie, with a screenplay by Mike White (School of Rock), The One and Only Ivan follows the true story of Ivan (Rockwell), a 400-pound silverback gorilla who lives in captivity and performs for audiences in a mall for his trainer and owner of the mall, Mack (Cranston). The screenplay comes from the award-winning children’s book by the same name by Katherine Applegate, who based her story on a real gorilla named Ivan who lived in a Washington shopping centre for 27 years.

The story is narrated entirely by Ivan himself, who enjoys his life performing for audiences alongside his animal friends, Bob the dog (DeVito) and Stella the elephant (Jolie). Practically raised by the father-figure Mack, Ivan has few memories of the jungle and his life outside the mall. However, that all changes when Mack introduces baby elephant Ruby to help boost audience attendance. Recently separated from her family, Ruby sparks something within Ivan that causes him to question his life, where he comes from and ultimately, where he truly belongs. And when Ivan gets his hands on some finger paint and begins to show off some seriously impressive artwork of his old home in the jungle, you won’t be the only one wiping away tears.

Who else stars in The One and Only Ivan?

This feel-good film boasts an impressive range of names working both behind-the-scenes and giving life to the animals through their voice. Ivan (Sam Rockwell) may be a star of the show, but he is accompanied by some other pretty big names in Hollywood; DeVito and Jolie as Bob and Stella respectively, as well as Mike White as Frankie the seal, Helen Mirren as Snickers the poodle, Phillipa Soo (Hamilton) as Thelma the bird and Ron Funches as Murphy the rabbit. Child actress Brooklynn Prince (The Florida Project) stars as Ruby the elephant, and of course, Bryan Cranston brings his father-figure charm to the big screen.

Join Cranston’s madhouse on August 21 as The One and Only Ivan lands on Disney+.