Pop quiz, hotshot. What do Jessica Lange, gorgeous clean-cut boys in blazers, brutal murders, heart-breaking gay storylines and an anthology series all have in common? Ryan Murphy, of course.

Murphy, aka The Most Powerful Man in Television, recently signed a $300 million deal with Netflix (the biggest producer deal in television history, bow down to our Queen) and we’ve been patiently waiting for his first project. Thankfully, the wait is over as the trailer for The Politician drops – a satirical comedic take on the cut-throat world of politics (even if they are just still in high school).

What is The Politician? 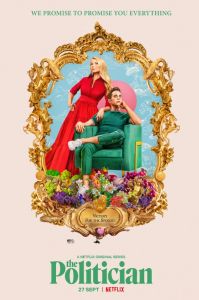 Everyone knows High School is tough – Netflix described it as “the most treacherous political landscape of all”- and Payton has his work cut out for him, outsmarting his fellow candidates, maintaining the good boy image he worked so hard to create, and maintaining his own mortality. Oh yeah, we forgot to mention, there’s going to be blood, sweat and tears – with an emphasis on blood.

Much like Murphy’s American Horror Story and American Crime Story, the dramedy is the first season of what’s expected to be an anthology series – each season following Payton in a different political race, leading up until the final season in which Payton finds himself actually running for President. It’s ambitious, it’s hot, it’s Ryan Murphy.

Gwyneth Paltrow in all her glory stars as Platt’s adoptive mother Georgina, a character who is rumored to be an overdramatized, self-aware parody version of Paltrow (her husband and co-producer Brad Falchuk called her “his muse”). Lucy Boynton (Bohemian Rhapsody) plays Astrid; Payton’s opponent with a ruthless desire to take him down and win the election. Zoey Deutch plays Infinity Jackson, Payton’s ‘secret weapon’ who runs besides him as vice-president.

She is shown seemingly with a terminal illness, but we have a bad feeling that’s not quite the case. Jessica Lange, AHS royalty and Murphy’s favourite child, stars as Infinity’s grandmother and has arguably the greatest line in a trailer, ever. Also starring is Dear Evan Hansen and Glee alumni Laura Dreyfuss and academy-award winning producer Bob Balaban.

What does the trailer show us?

Honestly, that trailer is a whirlwind. It stated that The Politician promises “Strong leadership, inalienable rights, civil discourse and political correctness” but all we saw was excellent outfits, multiple plotted murders, a closeted Payton and people with way too much money (aka, Murphy’s best ingredients).

Seems like to us that Saint Sebastian High School is the perfect practice field for a life in politics. Follow Payton along for the ride when episodes drop on Netflix on September 27.