We’re still recovering from that cliff-hanger at the end of the first season of Netflix’s apocalyptic comic adaption The Umbrella Academy. Spoiler alert: we don’t think they saved the world. Luckily, season two is just around the corner, and hopefully all the answers we’ve been so desperately craving, as it drops on Netflix on July 31.

What is The Umbrella Academy? 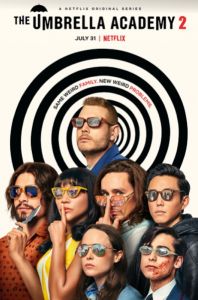 The surprise smash-hit The Umbrella Academy is a superhero dark comedy based on the comic book series of the same name by Gabriel Bá and My Chemical Romance’s Gerald Way. It follows a group of misfit siblings who were all adopted at birth by an eccentric billionaire after displaying bizarre supernatural powers. Together, they are the Hargreeves – Vanya (Ellen Page) who at first appears to possess no ability, Luther (Tom Hopper) an astronaut with super strength, Diego (David Castañeda) who can curve the trajectory of anything he throws, Allison (Emmy Raver-Lampman) who can control minds, Klaus (Robert Sheehan) who can communicate with the dead, The Boy (Aidan Gallagher) who can jump through time and space and Ben (Justin H. Min) who is dead but can summon tentacled horrors from his body.

After training together for years, the family go their separate ways until, twenty-odd years later, the siblings unite as they hear of their father’s passing. At the funeral, The Boy returns from the future to inform them that a global apocalypse is imminent — in fact, they have just eight days to team up and save the world.

What can we expect in season two?

We think it’s been long enough that we’re allowed to talk spoilers. The season one finale ended with that dramatic cliff-hanger as The Umbrella Academy were forced to turn on *dark powered* Vanya in her mission to try and destroy the world. The season concluded with Vanya destroying the moon and wreaking havoc on Earth, with the rest of the Hargreeves siblings sending themselves back in time to try and stop the apocalypse happening years before.

Season two picks off right after the Hargreeves time jump — all the way back to 1960s Dallas where the siblings have been scattered throughout time and place. Following? We barely are. Basically, they’ve all got their own thing going on and redemption is all seeming a little grim. According to Netflix, “the Umbrella Academy must find a way to reunite, figure out what caused doomsday, put a stop to it, and return to the present timeline to stop that other apocalypse. All while being hunted by a trio of ruthless Swedish assassins. But seriously, no pressure or anything.”

Will the same cast be returning to The Umbrella Academy?

Thankfully, all of the cast from season one have confirmed that they will be reprising their much-loved roles in the second season. Netflix has also announced a trio of newcomers to join as series regulars; Rita Arya (Doctors) will play Lila, the ‘brilliant and insane chameleon’, Yusef Gatewood (The Originals) as Raymond, a ‘born leader and loving husband with the ability to disarm you with a look’ and Marin Ireland (Sneaky Pete) as Sissy, a ‘fearless Texas mum’. It’s not much to go on, but judging by season one, we’re sure all three characters will have more than meets the eye.

Catch up with the Hargreeves when season two of The Umbrella Academy returns to Netflix on July 31.