If you’re a hardcore fan of DC, chances are you’ve read the comics and are well-acquainted with the Doom Patrol – a heroic squad of misfits from the DC Universe whose superpowered ‘gifts’ are the result of trauma in their normal life.

For the rest of us, it wasn’t until 2018 during the first season of DC’s Titans that the unlikely gang graced our screens in a brief one-episode cameo. It was short but sweet, and it left us wanting more. Thankfully, DC was listening, immediately ordering Doom Patrol their own spin-off show to be created by Jeremy Carver of Supernatural. The result? A surprisingly comedic take on a group of outcasts-turned-reluctant-superheros, which won over audiences and critics alike for its unique premise and complex characters.

Not only that, but the cast packs a punch. Brendan Fraser stars as Robotman alongside Diane Guerrero as Crazy Jane, April Bowlby as Elasti-Girl, Matt Bomer as Negative Man, Jovian Wade as Cyborg and Timothy Dalton as ‘The Chief’, the man who brings the unlikely gang together. With a cast like that (hello, James Bond of the 80s) and a storyline with depth far beyond the usual superhero action movie, it’s easy to see how Doom Patrol stands proudly on the podium as one of the most popular DC Universe originals with two seasons already under its belt.

Despite this, it can be pretty tricky being an Aussie DC fan and tracking down somewhere to stream the show, as Doom Patrol was available exclusively on the American channels HBO Max and DC Universe. Thankfully, there is now a solution: Foxtel’s newest sister streaming service, BINGE, has picked up Doom Patrol and both seasons are available for subscribers to stream on-demand.

How to watch Doom Patrol in Australia 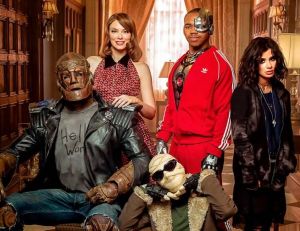 To watch Doom Patrol in Australia, you can tune into BINGE, Foxtel Now, or iTunes. BINGE and Foxtel Now offer both seasons, while iTunes provides viewers the choice to purchase and download individual episodes or seasons.

With the recent launch of BINGE, a truckload of exclusive American content has made its way over to the new platform. Meaning, both seasons of Doom Patrol will be available to stream. It also means that all future seasons will become available if commissioned.

Of course, we can always rely on Foxtel for a lot of our favourite American television, so it makes sense that Doom Patrol is on the platform. But, we also know that Foxtel comes with a bit of a price tag. Whilst BINGE will only cost you a minimum of $10/month (and a maximum of $18), to stream Doom Patrol on Foxtel you’ll need to subscribe to Foxtel Now which will set you back $25/month. If you’re thinking about Foxtel, but aren’t too sure what is on offer, it may also be worth exploring Foxtel Packages.

If you think you’re keen on Doom Patrol but aren’t ready to commit to either Foxtel Now or BINGE, then you might want to go ‘old school’ and check out Doom Patrol on iTunes. You can purchase individual episodes for $3.50 each, or a season for $14.99.

What is Doom Patrol about?

Doom Patrol follows a group of heroic misfits, who all got their powers through traumatic circumstances and forced them to flee their regular lives and go into hiding. The members are recruited by ‘The Chief’ (Dalton), who provides shelter from the outside world, medical care, and most importantly, purpose. The series jumps between time, dimensions, realities, and planets, as we learn the backstories of the iconic characters whilst they band together to fight evil.

Creator Jeremy Carver described the show as about “a group of reluctant heroes who are content living in isolation, until they’re called upon to rescue a world that has long shunned them”.

Catch up on season 1 and 2 of Doom Patrol

If you’ve been meaning to check out Doom Patrol but haven’t had the time, now’s your chance to catch both seasons of the beloved show on BINGE, Foxtel Now or iTunes. And if you’ve done all that, check out other shows and movies that newcomer BINGE has to offer.

The jury is out to DC and HBO Max on whether Doom Patrol will be renewed for a season three. But with the fanbase behind it, we’d be surprised if it wasn’t.