Who doesn’t love a good international relationship? We do… There’s Nicole Kidman and Keith Urban. The Hemsworth brothers and Hollywood. The Barmy Army and the Richies. Meghan Markle and the entire British Royal family (kind of). I’m getting carried away…

Anyway, fans of John Cena and the world of WWE will be pleased to hear that the ultimate international relationship has been formed. If you’re standing up… maybe grab a chair. If you’re sitting down… getting horizontal wouldn’t be the worst idea. You heard it here first (well, maybe not first) – the American media company WWE has officially landed on Kayo.

WWE and Kayo. Kayo and WWE. It has a good ring to it, doesn’t it? Finally, us Aussies have a concrete place to watch the sport (are we calling it a sport?) to our heart’s content. 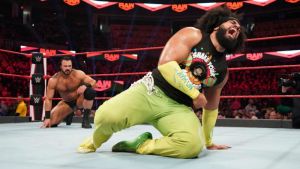 WWE on Kayo: What does this mean?

Basically, it means non-stop WWE action, live and on demand. Kayo subscribers are able to watch every new episode of the WWE’s flagship shows – Smackdown, Raw and NXT – on the multi-sport streaming service as they air in the US and then on demand for the next 14 days.

Take Tuesday off to clear the mind, then get straight back to it on Wednesday with the Raw episode, where you can see WWE Champion Brock Lesnar in action, along with Becky Lynch the Raw Women’s Chamption and 17-year WWE veteran Randy Orton.

First run episodes throughout the week will be available via the Fox Sports channel on Kayo and then On Demand for the next 14 days on Kayo.

It is all happening – and if you wanna get in the ring but aren’t a Kayo subscriber, then start by checking out Canstar Blue’s guide to all things Kayo and the complete list of sports available for streaming.