Bryan Cranston is breaking bad…again. Seven years after the conclusion of Breaking Bad, six-time Emmy winner Cranston is making his long-awaited return to the silver screen — playing another character who suffers a fall from grace after switching to a life of crime in a quest to protect his family. Except this time, instead of cooking meth in a RV, Stan’s Your Honor sees Cranston playing a highly regarded New Orleans judge who goes to great lengths to protect his son after a deadly hit-and-run. Your Honor begs the question: how far would a parent go to protect their child? Catch the series on Stan on December 7.

What is Your Honor? 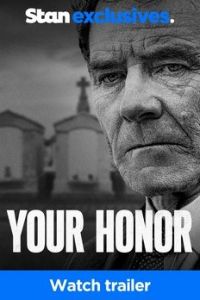 Based on the Israeli series Kvodo, the 10-episode legal thriller follows the lives of the Desiato family — New Orleans judge Michael (Cranston) and his son Adam (Hunter Doohan, Truth Be Told). The dramatic first episode sets up the series: Adam hits a teenage boy with his car and, after failed attempts to revive him, drives away and leave him to die.

Instead of calling the police, he instead flees to his highly-respected father for protection. Michael, who only a year earlier lost his wife and Adam’s mother, decides he will do everything in his power to keep his son’s name anonymous and out of jail. That is, however, easier said than done, as it’s revealed that the deceased boy is the son of a widely-feared New Orleans crime boss, Jimmy Baxter (played by Michael Stuhlbarg, Call Me By Your Name) and Gina Baxter (Hope Davis, For the People) who may be even more dangerous than Jimmy.

The family believe the death was a murder and are out for revenge — stopping at nothing until they uncover the man (or in this case, boy) responsible for killing their son. Michael vows to keep Adam safe at all costs, but what happens when he starts to slip into the wrong side of the law, and can’t stop?

According to Stan, Adam’s accident, and choices made by both him and Michael, will lead to a “high-stakes game of lies, deceit and impossible choices”. The ethical dilemma that lies at the heart of the series asks one to think that, when presented with a child’s wrongdoing, how far would a parent go to protect them?

Catch Bryan Cranston up to his old tricks when Your Honor lands on Stan on December 7.