In a collaboration few saw coming, Facebook and Ray-Ban have teamed up to create a pair of smart glasses called ‘Stories’ (not to be confused with the Facebook ‘Stories’ feature).

The Ray-Ban Stories are a pair of sunglasses with smart functionality, aesthetically looking a lot like a traditional pair of Ray-Ban specs. This is in contrast with the more traditionally ‘Sci-Fi’ look of other smart glasses, like Google’s ‘Google Glass’ smart glasses from years ago, and TCL’s NXTWEAR G smart glasses, which were released last month. These glasses also have a different purpose in mind.

The Ray-Ban Stories glasses include two cameras on the sides of the lenses for capturing video and photos, speakers in the side pieces for playing music, and microphones for calls and for AI voice assistance when recording videos (through the trigger word ‘Hey Facebook’). You’ll need a Facebook account to use these glasses, which isn’t unheard of, given that you also need a Facebook account to use an Oculus Quest VR headset (also owned by Facebook).

Both cameras are 5-megapixels, so don’t expect stellar photography – the quality of the cameras will likely not be similar to modern smartphones, so if you do use these, don’t shoot video with them instead of your smartphone. There’s also a little white light on the front of the glasses that indicates when it’s recording footage. This should come as a given, but if you’re going to record other people, make sure you tell them first – these glasses could be a bit of a privacy worry for some people. 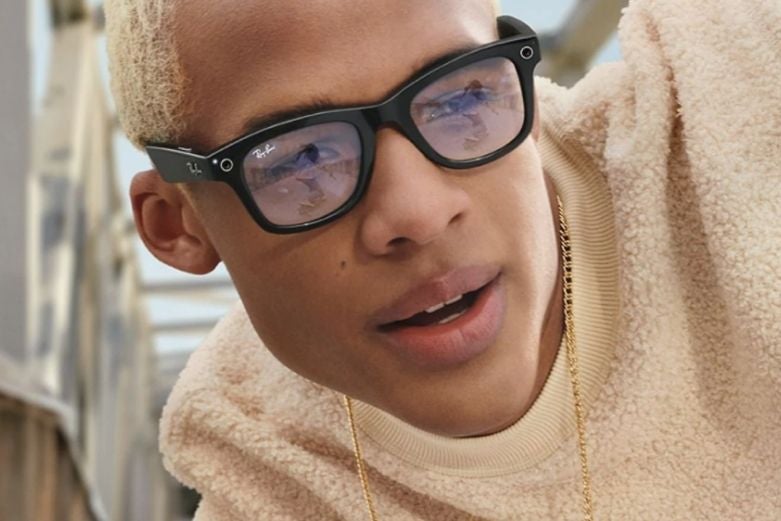 A companion app (called ‘View’) is also available, letting you see the full camera roll of pictures and videos that you’ve taken when paired with the glasses. Overall, some 500 photos can be snapped and stored on the Ray-Ban Stories’ local storage, so you’ll want to be using this companion often to transfer photos to your phone.

Much like with a pair of wireless earbuds, the Ray-Ban Stories come with a charging case, that can apparently recharge the spectacles three times before the case runs out of battery itself. Casual use of the smart glasses will run a battery through in six hours, with a full recharge taking one hour.

The Ray-Ban Stories are available now from the Ray-Ban website. You’ll be able to get prescription lenses included when you go to purchase these specs. The glasses will be available in three different styles (‘Meteor’, ‘Round’ and ‘Wayfarer’) in six different colours; Black, Brown, Blue, Dark Green, Light Green and Black with clear lenses. In Australia the Ray-Ban Stories start at $449.

If you’re interested in picking up the Ray-Ban Stories, consider picking up a new phone plan as well. The Stories have smartphone integration, and having a phone plan will enhance the features these smart glasses are capable of (such as photo sharing, recording footage, music streaming and phone calls). You can find a wide selection of postpaid and prepaid plans in the table below.

Are smart glasses worth my time?

Right now it doesn’t look like smart glasses are worth the cost of admission, but that might not be the case forever – we’ll wait and see. For now, it’s tough to see the functionality of these smart glasses as essential, when you could just use your smartphone. Perhaps for when your hands are busy and you want to snap something fleeting, but even then the number of times you might use these glasses could be limited.

On the plus side, these specs follow the classic Ray-Ban aesthetic, so at least it has style points, unlike the Google Glasses or the TCL NXTWEAR smart glasses. So perhaps there’s the double functionality of these smart glasses having cool features, and also making a fashion statement.

Smart glasses also vary massively in terms of features. For example, while the Ray-Ban Stories focus on video and photo capture, the TCL NXTWEAR smart glasses focus on giving you a high-quality media viewing experience close to your eyes. If you’re interested in shopping for smart glasses, compare around and make sure you’re getting a pair with the features you want. Realistically, it all comes down to what you’re willing to spend your money on.