Lots of us love listening to music through earphones or headphones. But lots of us also know that too much music, or music that’s too loud, can do some serious damage to our ears and our ability to hear.

The MRC Institute of Hearing Research estimates that one in six adults has suffered hearing loss to an extent where it may cause problems in social situations. So why do lots of us still blast music into our ears at ungodly volumes, regardless of the damage it’s going to do? For some of us it’s apathy, for some of us it’s ignorance. Either way, it’s not good for us. But before we start giving advice on how to reduce hearing loss, it’s important to understand why it happens and what causes it.

Hearing loss is caused by permanent damage to the stereocilia. Hair cells in the inner ear, which convert sound vibrations into electrical signals, can become damaged. And unlike some animals, humans lack the ability to regenerate these hair cells.

Scientists are currently experimenting with ways of stimulating regrowth of these hair cells, however for the moment we’re stuck with ears that can’t be fixed once they’re damaged. So here are some tips to help you avoid damaging your ears in the first place, or at least prevent further damage.

Turn your music down

The first and most obvious solution is to listen to your music at a lower volume. Music – or any sound for that matter – exceeding 85dB (decibels) has the potential to damage hair cells, and the extent to which this damage occurs depends on, among other things, how far above 85dB the noise in question is. Now, 85 sounds quite excessive, but consider that a normal conversation occurs at 60dB, and city traffic can easily reach 80dB. Suddenly 85 doesn’t seem so out of reach now does it?

An mp3 player, such as an iPhone, can pump sound through earphones at levels exceeding 100dB – a level which could potentially cause serious damage to your ears. So if you’re listening to music through earphones or headphones and it seems a bit loud, err on the side of caution – and quiet – and turn the volume down a bit. Better safe than sorry.

Listen to music for shorter periods

The other main factor that determines the extent to which your ears can be damaged is the length of time they’re exposed to the sound in question. The Oregon Health and Science University says that if you decide to listen to music through your iPod at maximum volume, you can expect permanent damage to your hearing within 15 minutes. While most people probably don’t listen to their music at full volume, it’s important to know that longer listening periods can make up for lower volumes. Exposure to a 90dB sound for three hours will cause damage equivalent to the harm that would be caused by 30 seconds of exposure to a 150dB sound.

If you’re planning on listening to music for an extended period of time, you’ve got two ways to try and avoid damage caused by extended listening. The first is to simply lower the volume of your music. While the rule of thumb is that extended listening makes up for lower decibel levels, if your music is below 85dB to begin with, the chance of damage is very low.

Your second option is to break up the extended period of listening with occasional five or ten-minute breaks, in order to give your ears a chance to recover. It’s worth noting that these methods aren’t mutually exclusive – practice them in tandem and your ears will thank you!

If you’re working with low-quality earphones, you may be forced to expose your ears to dangerously high decibel levels for the sake of sound quality. Cheap, low-quality earphones generally have a poor bass response, meaning they’re less effective at transmitting bass frequencies than they are with mid or treble frequencies. In order to boost the bass coming from your earphones, you can simply turn the volume up. This may get the pumping bass you wanted, but by doing so you will have also amped up the mid and treble frequencies to a potentially damaging level, and it’s important to note that higher-frequency sounds are the ones most dangerous to your hearing.

In order to remedy this problem, consider investing in a higher-quality pair of earphones. You’ll get double benefits, in that not only will you get better sound quality, but they’ll be much kinder to your ears.

While your ears may already be slightly damaged, you can easily prevent further damage to them by heeding this advice. Your hearing may seem fine right now but if you keep exposing your ears to harmful noise levels, you’ll probably suffer for it later in life. Once again, it’s a case of better safe than sorry. 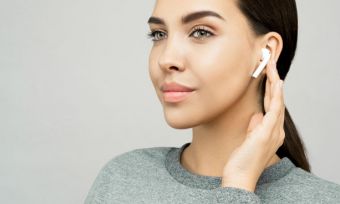