Summertime means beaches, beaches, and more beaches. So pack up the car and take one of these coastal road trips this summer. 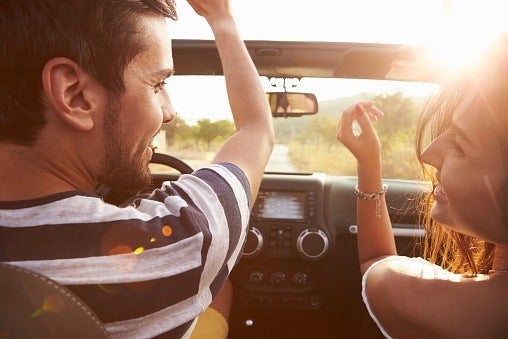 Stretching all the way from Cairns to Brisbane, the Pacific Coast Touring Route takes you to some of the biggest coastal attractions in Queensland. As well as seeing heaps of the World Heritage listed Great Barrier Reef, you can explore the vibrant Sunshine Coast, four wheel drive on pristine Fraser Island, soak up some history the provincial city of Maryborough, and watch whales from Hervey Bay.

From the coast, cross your way back inland, and stop by the historic sugar cane city of Bundaberg. Stop by the brewery for a sample of their famous rum, ginger beer, or other brewed drinks.

Whether you are watching sea turtles hatch at Mon Repos, sampling a mouth-watering steak in Rockhampton (beef capital of Australia), birdwatching in Yeppoon, or snorkelling on one of the many reefs off the coast, you are bound to have a great time on this road trip.

The number one tip is to set a couple of days aside in order to explore the gorgeous islands of the Whitsundays.

Continue north and explore the Green Way between Townsville and Cairns – the 350km stretch of 12 national parks. There is so much to explore along the way in towns such as Tully, Innisfail, and Charters Towers, before finally reaching Cairns.

This trip can be done in at least six days, but you’ll need a few more to accommodate for island adventures along the way.

The touring route in New South Wales will take you from Sydney to Brisbane, while exploring the lush beauty of New South Wales and the gorgeous beaches of South-East Queensland.

There is plenty of surfing along the way, as well as water sports, bushwalks, wine tasting, skydiving, fishing, and motor sports. Impressed? Well by this point you will have only reached Port Stephens.

As the trip continues, there is more of everything mentioned above, as well as exploring World Heritage listed wilderness, and a trip to the Big Banana at Coffs Harbour.

From Coffs, it is off to iconic Byron Bay with many stops in between; Grafton, Bellingen, and Glenreagh are all very popular. For some adventure, as well as some platypus spotting, head to Nymboida, home to the largest platypus colony in the region. Re-join the Pacific Highway and make your way to Byron via Ballina.

After taking in all the Byron Bay has to offer, it is not much further to travel before you reach the famous Gold Coast. If you want to make the most of the journey, take a detour through the Murwillumbah national parks and climb Mount Warning.

Summer is glorious on the Gold Coast, so make the most of your day by hitting the beach, exploring Tambourine National Park, or having fun at the theme parks. After a big day, it is only an hour’s drive to Brisbane to complete your journey.

Tasmania really is the place to be in summer, this tiny island is jam-packed with fun stuff. A round trip of the island will cover everything you could hope to see in this beautiful state.

In a day, you can make it from Hobart to Freycinet National Park and take in all of the natural beauty. You can camp there or spend the night in nearby Swansea, Bicheno, or Coles.

From Freycinet you can make it to Launceston, stopping off for a swim at St Helens or trek the Bay of Fires Walk. In Launceston you can take in panoramic views of the city from Cataract Gorge, or indulge in some wine tasting or a spa treatment.

Antiques, art, crafts, and murals are in abundance on the road between Launceston and Stanley. Stopping off in Devonport, you can surf at The Bluff, sail the Mersey River, or see native animals at Narawntapu National Park. Seals and Fairy Penguins can be spotted on the coast once you get to Stanley.

Nothing will soothe the soul like the wilderness of Cradle Mountain. Whether you are trekking, fishing, or flying, you are bound to have a good time. Stay overnight in the cabins and lodges nearby.

Between Cradle Mountain and Strahan, you can find Queenstown, which was once the world’s richest gold and copper mine. The silver mining town of Zeehan is also along this route, as is the Franklin River, where you can go white-water rafting.  For a change of pace, kayak on Macquarie Harbour in Strahan, and indulge in the decadent food and wine.

On your way back to Hobart, travel through World Heritage listed wilderness along the Lyell Highway. The best place to stop is Tarraleah, an old hydro-electric town where native animals wander freely.

Do your Tassie road trip over New Year’s to coincide with The Falls Music and Arts Festival; it is a huge event and is a fun way to ring in the New Year before continuing on the road. Falls is held in Marion Bay, about an hour out of Hobart.

The Great Ocean Road: the mother of all road trips, and an essential family holiday.

Summer is the best time to travel the Great Ocean Road; not only is the surfing incredible, but there are two huge events over the summer. In Lorne, The Falls Music and Arts Festival is happening over New Year’s, and the Rip Curl Pro is held over Easter at Bells Beach in Torquay.

The first major stretch is from Melbourne to Lorne, it is along this stretch (at Torquay) where the Great Ocean Road really begins, as does Victoria’s surf coast. Visit the surfing museum, or just ride the waves yourself.

Between Lorne and Port Fairy, the rugged cliffs drop into the ocean on one side, and National Park thrives on the other. In Apollo Bay, check out Great Otway National Park, making sure to stop at the glow worm caves. You’ll see eight of twelve apostles as you drive along this stretch of road towards Port Fairy.

Between Port Fairly and Robe, you will find Portland, Victoria’s first permanent European settlement. There are hundreds of heritage buildings to check out, and you can also watch fishing boats unload their catch on the waterfront.

Moving on to Bridgewater Bay, you will see a sand-petrified forest beneath the deep-blue waters. Once you’re back on the highway, it is across the border and onto Mount Gambier; it is part of an extinct volcano and is surrounded by crater lakes which turn vivid blue in the summer. Between Mount Gambier and Robe, drive through the fishing towns of the limestone coast.

On your way from Robe to Victor Harbour, learn about indigenous culture in the Coorong region with a local Ngarrindjeri guide, then cross the Murray River to reach the wine region of Langhorne Creek. There are also many beaches to swim at between Coorong and Victor Harbour.

One more day will get you to Adelaide, but you don’t need to spend all of it driving. There are so many attractions along the Fleurieu Peninsula that it will be hard to choose just one. Make the most of your trip and try some along the way, as the drive between Victor Harbour and Adelaide only takes an hour and a half.

The coastal route between Melbourne and Sydney can be transformed into a memorable holiday, stopping at gorgeous beaches and experiencing the best of the south-east’s national parks.

Between Sydney and Nowra, you will drive over the Sea Cliff Bridge and into Wollongong. Along this route, you can also visit the Kiama Blowhole, Kangaroo Valley, and Coolangatta Estate.

On the northern headland at Ulladulla, learn about local indigenous history on the One Track For All walk. Further south, experience the 19th century gold mining village of Mogo. Continuing on the southern journey, make a stop in Bega for their famous cheese.

After crossing the border, you will reach the beautiful coastal town of Mallacoota, with its tranquil and shimmering lakes. Further along the road, you can feed Sea Eagles on the Genoa or Wallagaraugh rivers and also see little penguins on Gabo Island.

The rural scenery between Bairnsdale and Walhalla awaits you, with a variety of things to see, do and eat. The gold rush village of Walhalla is fringed by a romantic forest, and is situated on the southern edge of the Victorian Alps.

Between Walhalla and Foster, there is so much to do. The valleys in this region are lush, and aren’t too far away from the Wilson’s Promontory marine park. In summer, snorkel or dive the granite cliffs, and see the wonders of the ocean below.

The next stop is Phillip Island for the iconic Fairy Penguins, or alternatively, the Grand Prix circuit, which is home to the Australian MotoGP. From here, it is only a two hour drive to Melbourne, and your journey will be complete.