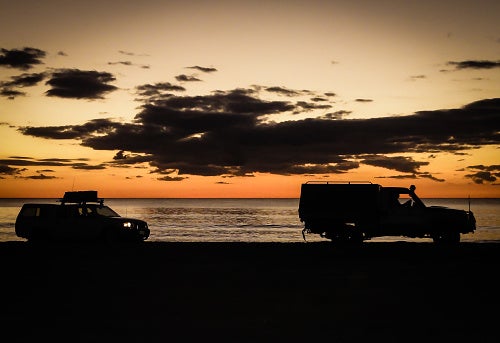 Home to more than 1.3 million square kilometres of desert, over 10,000 beaches, 4.2 million hectares of rainforest and many beautiful mountain ranges, Australia is something of a roadtrippers dream. What better way to explore than with a 4WD that can conquer both the wide, open paved roads and off-road paths.

Here are seven of the best 4WD adventures to get you started.

The 517 km track offers a bit of everything, running from Marree, a small town in northern South Australia, north across the Tirari Desert and Sturt Stony Desert, ending in Birdsville in south western Queensland.

2. Western Australia – Canning Stock Road
The Canning Stock Road is a challenge for the experienced four-wheel driver, renowned as one of the world’s most remote off-road tracks. Running a total distance of around 1,850 km from Halls Creek in the Kimberley region of Western Australia to Wiluna in the mid-west region, it is also the longest historic stock route in the world.

The route was originally proposed as a way of breaking a monopoly that west Kimberley cattleman had on the beef trade at the beginning of the 20th century, and passes through several iconic deserts including the Gibson, Little Sandy and Great Sandy Deserts.

Binns Track is the newest track in NT, and is named after Bill Binns – a Park Ranger who frequented the track during his 32 year service with Northern Territory Parks. This epic four-wheel drive adventure takes drivers through the lesser known parts of central Australia, passing through diverse terrain including mountains, deserts, sandy slopes, riverbeds and bitumen.

As one of the most diverse states in Australia, Queensland is home to vast outback, sunny coastline and green rainforest – making it the perfect 4WD destination. The drive to the tip of Cape York takes drivers through these spectacular landscapes, putting on a show of unexplored wilderness and challenging roads.

Highlights include ancient Aboriginal Quinkan art, waterfalls, Somerset Ruins, Bamaga and the Torres Strait. Caution: This is a tough drive and for the experienced traveller only.

Tasmania is a great spot for a 4WD vacation, offering a spectacular mix of beach driving, rocky slopes and bush tracks. The stretch of highway between St Helens and Orford is a great family drive, with opportunities to stop and fish or swim. If you’re lucky, you might even get to see a seal or sea lion, which are often seen lazing on the beach to catch some sun.