Did you know the first car with an internal combustion hydrogen engine was created in 1807? But we’re willing to admit that we don’t know as much as our mechanic. So we’ve compiled a list for beginners of all the basic parts of your engine and what they do. 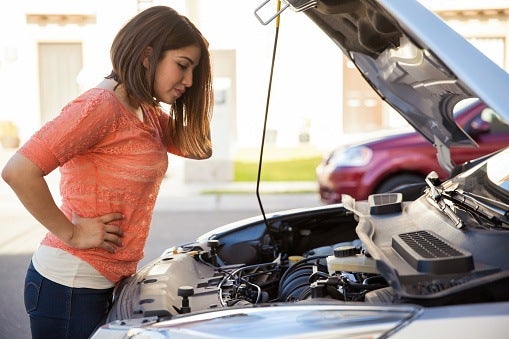 Parts of your engine

Air-conditioning compressor: This puts pressure on the “freon” so your air-conditioner can cool down the air.

Air filter: If your air-con is cold enough but you’re coughing and sneezing as you drive along, you probably need a new air filter.

Alternator: Allows the car battery to charge while your engine is running. Amazing.

Axle: The shaft that turns the wheels.

Battery: The black box-looking thing that provides power to your engine to get it started and keep it running. A flat battery can get jump started by connecting jumper leads to transfer energy from another car’s battery to yours, but eventually the whole thing will need to be recharged or replaced.

Brakes: The things that slow down and stop your wheels from moving. When they start to squeak or squeal, they need to be replaced.

Camshaft: A metal shaft that opens and closes the valves in a cylinder.

Chassis: The metal frame that holds all the main parts of the car together.

Clutch: The part that physically moves from gear to gear when you change gears.

Crankshaft: Turns the wheels of the car. The pistons turn the crankshaft as they move up and down.

Cylinder: This is where the air and fuel mix gets ignited. Each cylinder contains one piston.

Dipstick: The long metal stick in the transmission fluid and oil fluid chamber that you lift out to check that there is enough fluid left.

Drivetrain: The primary engine and transmission parts. Powers the car and makes it move.

Engine block: The lower part of the engine. Contains the pistons, crankshaft, and cylinders.

Fuel injector: This is the new version of the carburetor. It gets gas from the fuel tank into the engine.

Gearbox: a.k.a the transmission. Houses the gears.

Head gasket: The mechanical seal between the cylinder head and the engine block. Prevents coolant and fuel from mixing.

Muffler: This is the part connected to your exhaust pipe. If your car is sounding noisy, there’s probably something wrong with your muffler.

Oil pump: The pump that moves the oil through the moving parts of the engine to lubricate them.

Piston: The part of the engine that moves up and down to compress the air and fuel mix before it gets ignited.

Radiator: This part keeps your engine from overheating by running “coolant” up and down many connectged pipes. The engine fan keeps air blowing over the radiator to cool down the coolant.

Space-saving spare tyre: We thought we’d include this one because lots of people think you can use a space-saver like a normal spare tyre. Space-savers are thinner and lighter – to take up less space – so you can’t drive on them faster than 80km/h. They don’t last long, so once you’ve switched from a flat tyre to the space-saving spare, you need to go to the mechanic asap and get yourself a new “real” tyre.

Spark plug: Gets the car started. The spark plugs creates an electric spark that ignites the fuel in the ignition chamber, which is why we say we drive ignition engines. Looks like a long, metallic, corkscrew-shaped lightbulb.

Suspension/shock absorbers: The springs and other parts that sit between the wheels and the frame so that the wheels absorb any bumps or unevenness in the road.

Timing belt/timing chain: Connects the camshaft to the crankshaft. Makes sure that the valves open at the right time for fuel ignition.

Transmission: Takes the energy from the engine and transmits it to the wheels.

Tread: The patterns cut into the rubber on your tyres. Provides grip on the road in wet weather.

Why it’s helpful to know the basics