The Renault Zoe has long been a favourite of European consumers, and having been introduced into the local market in the last few years has provided Australians an option at the lower end of the electric vehicle price spectrum, decked out to deliver city-driving mobility, and with a clear emphasis on style.

Having made its debut in 2012, the Zoe has since established a strong presence both in France and the wider European market, and in the coming years is set to form an important component of Renault’s electric vehicle strategic plan, with the manufacturer planning to double Zoe production capacity by 2022.

What impact this activity will have on the Australian market remains to be seen – however, as the local electric vehicle market continues to evolve, Renault will doubtless be looking to position the Zoe as a viable option for consumers seeking to make the switch from traditional petrol/diesel-fuelled cars.

The Zoe has been released in a number of different variants, however the Renault Australia website currently lists the Zoe Intens as the sole option for Australian consumers, and for consumers interested in further information it is worthwhile getting in touch with a local Renault dealership.

Renault promotes the Zoe’s combination of emissions-free driving, no engine noise, no gear changes and a range of 300 km in real conditions, in stating that it “reinvents electric mobility”, and also highlights its focus on design.

With built-in rear door handles, the Zoe has the appearance of a coupe, sporting “soft lines, flowing design, and large chrome-finish logo”, complemented by 16-inch alloy wheels, with the hatchback decked out with the capacity to seat five.

Additional specs and colour options can be found below.

The Australian and European electric vehicle markets present starkly contrasting prospects for manufacturers at present, and it is truly a tale of two markets in evaluating what sort of impact can be expected from the Zoe at a local level.

While there may be growing momentum for change at a local level, the Australian market is still in its very early stages, and manufacturers such as Renault will be keeping a close eye on developments in the coming years.

Renault had previously promoted the Zoe’s arrival in Australia as marking “the beginning of a new history for practical, affordable, efficient and environmentally friendly vehicles”, and how it positions the Zoe in seeking to mirror its European success will be a point of interest going forward.

The Renault Australia website lists the following estimated drive-away price ranges for the Zoe when the following postcodes are entered:

Consumers can locate their local Renault dealership via the Renault Australia website, which will be able to provide further specific information on pricing and availability.

Renault states that the Zoe’s “smooth, silent engine” enhances the driving experience, with its battery, which is positioned under the floor and which has no impact on interior space or boot capacity, providing 300 km of real-world range in a single charge.

Serving to maximise driving range, the Zoe’s battery recharges automatically whenever the driver brakes or decelerates, with its heat pump able to air condition or heat more efficiently than a traditional system, while its tyres are designed to deliver ultra-low rolling resistance.

Among the Zoe’s other notable features are:

Renault describes the Zoe’s interior as complementing its exterior design, “with an intuitive, elegant design crafted entirely around you”, with the Zoe available in four colours: titanium grey, zircon blue, pearl white and glacier white.

How do you charge the Renault Zoe? 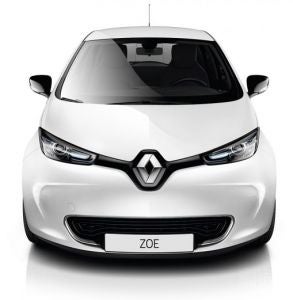 The Renault Zoe comes with a uniquely fitted Chameleon Charger, which adapts to different power levels (single-phase or three-phase AC power, up to 22 kW), adjusting the charging time depending upon the point used, with Renault describing recharging as “fast and easy”.

Renault states that the Chameleon Charger “is always able to charge at the maximum power available”, making the most of each charge, with it possible to get up to 60 km real range in 30 minutes, depending upon the type of charge point.

The Zoe is compatible with various power sources, delivering users a range of charging options, with Renault recommending a 7 kW wallbox, delivering a full charge overnight, for residential installations.

The Renault Zoe has received mostly solid ratings from motoring experts, however a number of reviews have brought up the issue of price:

Is the Renault Zoe worth the money?

While the Zoe sits at the lower end of the electric vehicle price spectrum, it still carries a price tag that will give consumers weighing up the pros and cons of an equivalent-spec traditional vehicle something to seriously consider.

In assessing pricing, consumers should also factor in the cost of the purchase and installation of any additional charging equipment that will be required, and it is worthwhile considering a range of options, dependent upon individual household charging requirements.

As is always the case with electric vehicles, in considering the total cost consumers should adopt a long-term outlook, assessing expected running costs and how these costs compare with traditional alternatives over the expected term of ownership, along with anticipated maintenance costs.