Since the Industrial Revolution and the rise of automated jobs, mankind has found itself with excessive time on its hands. With an increasingly skilled workforce we are able to push the boundaries, and exceed human limits previously thought unreachable. Science and engineering has come in leaps and bounds in the last 100 years. As such, we are now able to live out the most bonkers fantasies every boy – and girl – has dreamed of.

A common and fun way to push human limits is simply seeing how fast we can go. Records are constantly being broken – one-upmanship is human nature. Think sub-10 second 100 metre sprints, jet fighter speeds, and of course automotive land speed records. Have a look at some of the fastest cars ever built:

Who holds the land-speed record? 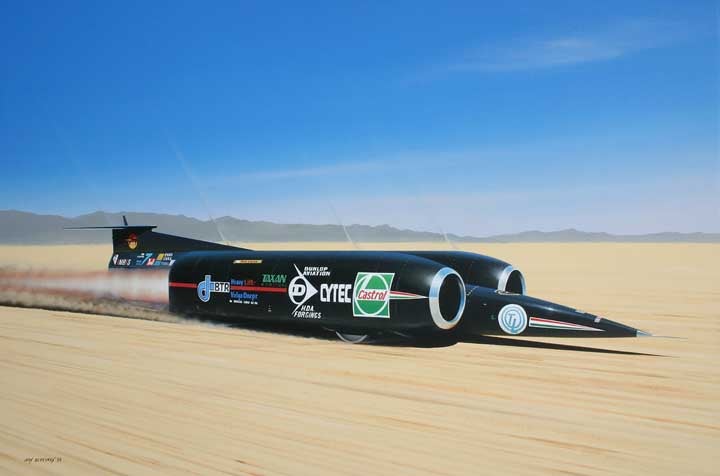 British RAF pilot Andy Green, who in 1997 set the record at 1,228km/h with the Thrust SSC (SuperSonic Car). This was of course with the assistance of Ron Ayers, Jeremy Bliss and Glynee Bowsher – the engineers and designers who made this also possible. On 15 October, in the Black Rock Desert in Nevada, Green drove his Thrust SSC across the barren land. ‘Drove’ is a bit of an understatement, as it was basically flying without wings; A Boeing 747’s cruising speed is only 920km in comparison. The Thrust SSC also broke the sound barrier – the first car to do so.

‘Car’ is also a loose term to describe the SSC. The Thrust SSC is more like a land-stricken jet. It was powered by two Rolls Royce Spey 202 jet engines, which generated 222kN (kilo Newtons). That’s 220,000nM of torque! It also produced a mind-blowing 82,027kw. See the table below for further statistics on the Thrust SSC:

While the Thrust SSC is astoundingly impressive, sadly it is not road legal and is decommissioned, being housed at the Coventry Transport Museum in England. Being that it set the land speed record nearly 19 years ago, you have to wonder if we have reached the peak of human limits. Everyone wonders this, until of course someone, somewhere, someday goes faster than 1,228km/h on land.

What is the fastest road-legal car?

That would be the Bugatti Veyron Super Sport. The Super Sport is recognised by the Guinness World Records as the world’s fastest production car, setting the speed record at a hair over 431km/h. This is a far cry from the Thrust SSC but it’s road legal! The record was set on Volkswagen Group’s private Ehra-Lessien track, near Wolfsburg in Germany. The pilot was former French racing driver Pierre-Henri Raphanel on 4 July 2010. Take a look at some of the Bugatti Veyron Super Sport’s specs below:

While most of its specs are absolutely insane in every aspect, its fuel economy isn’t all that terrible. This is especially when you consider a V8 Chevrolet Impala from 1963 uses about the same fuel over 100km, and has about the third of the power and torque; this shows you how far automotive engineering has come in 50-odd years.

The Super Sport is not without controversy however. When setting the record, Bugatti took the speed limiter off, which meant its usual top speed of 415km/h could be expanded to 430km/h. There was a lot of debate about whether it should hold the world record, though Guinness eventually decided that this removal did not classify as a modification (mods are banned to qualify for a world record), and the record was authorised.

So, you’re excited about the prospect of buying a Super Sport. You’ve got your couple million dollars, plus some left over for new tyres, fuel and servicing. That’s great, except all of the Super Sports are sold out, and Bugatti ceased production of the Veyron in 2014. The successor is called the Chiron, will set you back over $3.5m AUD, and was released in March 2016. Its power figures trump the Veyron, though much remains to be seen about its on-road performance.

What’s an alternative to the Bugatti Veyron? 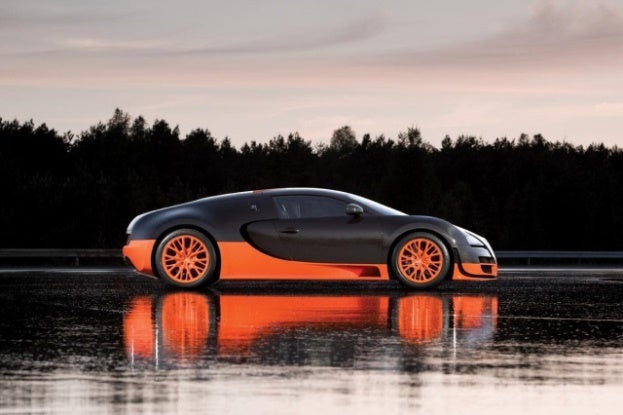 If you sadly cannot afford a Veyron, there is hope for you. It exists in the form of a Hennessey Venom GT and will set you back around $1.3m USD. Getting it to Australia from the US is a whole other problem, though. While it can technically go a bit faster than the Bugatti, the Hennessey Venom GT was ruled out of the Guinness World Records because it only reached top speed when driving in one direction. To be official, a record attempt requires the car to go for one run in each direction and an average is taken to account for wind conditions.

On top of these setbacks, there is debate as to whether it qualifies as a production car because it is hand-built. To differentiate itself from the Veyron, it considers itself the ‘World’s Fastest Convertible’. The car itself is based on a heavily-modified Lotus Exige chassis, with a 7.0L twin-turbo V8 engine. See below for a few more specs on the Hennessey Venom GT:

While still absolutely crazy like the Bugatti Veyron, the Venom GT has many features that are surprisingly ‘pedestrian’. Its gearbox is a 6 speed manual found in a Ford GT, and its engine is one that uses a relatively modest 8 cylinders and 7.0L (albeit, with twin turbos) developed by General Motors. It also uses Michelin PS2 tyres, which are many times more affordable than the Veyron’s $40,000 set. Overall, the accessibility of the Venom GT is a lot friendlier than the Veyron, but both remain toys for the super-rich.

How could we forget a Formula 1? This list wouldn’t be complete without one. The drivers of F1 cars are some of the most skilled in the world, having to withstand incredible G Forces, and fling their cars into corners at frightening speeds. F1 tyres are some of the most advanced in the world, and replacements are required in only so many laps. F1 cars are often the first thing that comes to mind when someone utters ‘fast cars’, but did you know not all F1 cars are equal?

The fastest F1 car belongs to Honda, and is titled the BAR-Honda 067 Lakester – catchy name.  BAR stands for British-American Racing, and as such the car is a collaboration of the two giant brands. At the time, not many people understood why Honda brought one of their F1 cars back from the boneyard that is a poor grid positioning. However, with some reworking, in 2006 the Lakester became the fastest F1-qualified car ever.

It was a job far bigger than pulling off the wings and starting her up; the team made quite a few modifications to turn the tester model into an extreme (track-legal) F1 machine. When it came to testing, the original goal was to achieve a record within Honda, and make it the fastest of all their own cars. Ultimately it exceeded this, and reached a speed of 413km/h.

Sadly, the likelihood of ever seeing it run again is slim. Today it is held at a wind-tunnel building owned by Mercedes Gran Prix in Brackley, England. It would also not be qualified to race in F1 today as the regulations are much different to the Lakester’s heyday in the 2000s.

Overall, these four land-speed record-shattering behemoths are the pinnacle of human automotive engineering, but it is only a matter of time before someone breaks the record again.