The tablet market can seem a confusing place to navigate, with plenty of brands keen to grab your attention, offering the latest and greatest. With the tablet’s range of uses and handy functionality, it’s not surprising that many are jumping on board the tablet train, the question is which one they will choose.

Microsoft is often thought of as technology royalty, bringing computers and its Windows programs into homes around the world. Seeing it in the tablet market is no surprise, although it still offers its fair share of tricks as the company looks to give consumers something different than your average tablet. Review the range of Microsoft tables below and see if one jumps out to you.

Microsoft’s strength comes from its expertise within the industry, as well as its partnership with other companies such as Lenovo and Dell, producing a range of Windows-friendly products for other brands. Since venturing into the tablet market with its laptop-tablet-hybrid Surface Book series, Microsoft has built up quite an expansive portfolio to choose from

The Surface Pro is the flagship for Microsoft tablets, with the latest models continuing to blur the lines between tablet and laptop. The detachable Kickstand keyboard that allows each model to be set up in a variety of ways, including Laptop Mode, Studio Mode and Tablet Mode, along with a variety of optional upgrades and features, meaning consumers will be able to find an individual fit for their needs.

The fifth generation Surface Pro is the OG of the Microsoft tablet family and still a fan favourite among customers. Available with an m3, i5 or i7 Intel processor, Microsoft says that the Surface Pro provides a smooth, efficient workflow so that you can stay productive on the go.

Some other features include: 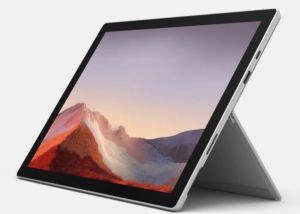 This seventh generation model has taken everything that people love about the Pro and boosted it with the inclusion of the i3, i5, or i7 10th Gen Intel Core processor for added multi-tasking capabilities and faster graphics, among other things. Some other features include:

The latest and most advanced of the Surface Pro family, with a price tag to match, the Surface Pro X is built with working from home and on the go in mind. Features such as an edge-to-edge display and a camera which automatically adjusts your eye contact during video calls make this Microsoft’s most functional addition yet. Some other features include:

The Surface Go is the Pro’s smaller, but mighty, cousin that is designed to be an affordable option for everyday tasks and working on the go. Microsoft recommends the Surface Go series for checking emails, shopping, homework and binge-watching your favourite television shows.

Features of the original Surface Go include:

The latest addition is the Surface Go 2, which features a 10.5 inch PixelSense display multi-touch screen and improved Intel Pentium Gold or 8th Gen Intel Core M3 processor. It also has improved battery life compared to its predecessor which is always a bonus. 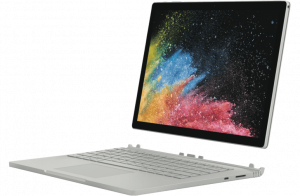 More laptop than tablet, the Surface Book family would be a contender for the largest tablet on the market, and is definitely edging into laptop dimensions. Despite its size, a hinge design can transform from laptop to tablet, using the keyboard as a stand similar to the Surface Pro series, or the touch screen can be removed from the base completely.

This model combines the sleek, compact design of a tablet with all the tech specs of a high-performance laptop. Powering the beast is either an Intel i5 or i7, with both giving users plenty of grunt to handle tasks and games. Other features include:

The new Surface Book 3 promises professional grade performance for graphic design, app development, video and social content creation and an immersive gaming experience, thanks to a quad-core 10th Gen Intel i5 or i7 processor. Some other features include:

Is a Microsoft Tablet Worth the Money?

With the way technology evolves and innovates, it can be a tough decision as to which product you should go with. As we all use our devices differently, the specs will be what you should look into before you make your final decision, as most brands and products will try and dazzle you with big numbers and impressive features.

As Microsoft is a leading software company within many electronic and computer-based markets, it’s hard to go past the Windows operator, with the expertise and functionality of its tablets a huge incentive to many. Keep in mind though, purchasing a tablet can be a very individual and personalised process, as certain models may suit your needs better than some others. While Microsoft definitely has the personalisation factor, checking out all of your available options can ensure that you end up with the best tablet for your needs.