When the weather heats up, we all wish we were on a tropical beach, relaxing under the shade of a palm tree and sipping on something cool and refreshing. Unfortunately, most of us can’t just drop everything and take a three-month holiday. We just have to find a way to cool off and have a little tropical escape at home.

Coconuts are one of the first things that come to mind when picturing a tropical holiday. It’s no wonder then that we’re going coco for coconuts – you’ve probably seen more coconut dishes popping up at restaurants, in supermarkets, and foodies gushing over coconut oil. Another popular coconut product is coconut water.

You’ll usually find coconut water in the juice section of your supermarket, in the smoothies at your local juice bar, and even in tropical-inspired cocktails at your local hipster pub. But what exactly is coconut water? And is it the magical health drink so many people seem to think it is? Read on to get the real deal about coconut water.

What is coconut water? 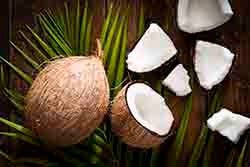 While the coconut image that might first spring to mind is a round brown thing that looks like a bowling ball, by this stage of development there’s no water left inside. Instead, coconut water is found when the coconut is younger, and still in its green case before the tough brown husk has developed. At this stage the flesh of the coconut is very soft and juicy. You don’t need a hammer to crack open a young green coconut – you can get the water out by cutting a hole in the top using a big, sharp and heavy knife.

Coconut water at this stage is clear and sweet. As the coconut develops, the water becomes less sweet and begins to convert to flesh, which gradually becomes more solid and turns into the fibrous tough meat that you probably most associate with ‘coconut’.

Why is coconut water so popular?

Coconut water has long been a popular drink in countries where coconuts are grown, but it’s recently exploded in popularity across the Western market with the rise of health-conscious consumers. It’s hit the shelves in the health food section and in gyms everywhere. But why is everyone drinking it?

It has a sweet, nutty taste that makes for a very refreshing summer drink when served chilled. Part of its rise in popularity is due to its naturally low sugar content, compared to other sweet drinks like soft drink and fruit juice. It’s probably just a passing fad like wheatgrass, goji berries and pomegranate each have been in the past. Let’s see how long this one sticks around!

What’s the difference between coconut water and coconut milk? 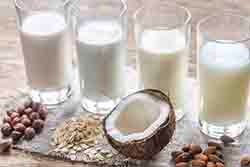 They’re very different in taste and nutritional content. While natural coconut water is low in sugar and has virtually no fat, coconut milk has high saturated fat content. Coconut water is usually consumed as a refreshing drink, while coconut milk is a common ingredient in Asian and Pacific Island recipes, such as curries, pudding, coconut rice, and piña coladas (in the form of coconut cream).

Is coconut water good for you? 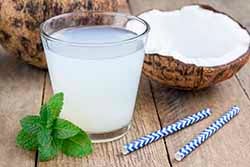 Coconut water is often touted as an all-natural energy nutrition drink. However, it does not contain any vitamins or minerals in significant amounts. Coconut water is certainly no superfood.

Some claim that coconut water provides optimal hydration. This isn’t necessarily the case. It lacks sufficient sodium and electrolytes to rehydrate serious athletes. For casual exercisers or people who find it hard to drink plain water, it can still be worth a go if the taste makes it easier to drink more.

When you exercise intensely for several hours in heat, you need more than hydration – you need carbs for energy and to replace lost electrolytes like sodium and potassium. Sports drinks aren’t so great at this either – usually something like a banana along with plain water is best. You only need this after some seriously intense sweating, such as after several hours of high-intensity exercise. Most people don’t need to worry about this.

While the health claims don’t stand up, it’s definitely delicious and usually much lower in sugar than soft drinks and juice. That being said, many of the commercial brands have added sugar, particularly if they’re mixed with fruit juice. Check the nutrition label if you’re trying to avoid sugar.

What can I use coconut water for?

While the most common way to use coconut is as a cool, refreshing drink, there’s quite a lot you can do with this tasty liquid.

What kinds of coconut water are there?

How much does coconut water cost?

Thanks to its spike in popularity, coconut water is far more common and cheaper than it used to be. Prices from major supermarkets range from around $4.00 up to $9.52 per litre. Here are some indicative prices for some of the most common brands:

There are quite a lot of brands on the market, dispersed between the juice, health food and Asian sections of the supermarket. Coconut water can also be bought from most health food and organics stores.

Should I drink coconut water?

There’s no real health reason to drink coconut water, apart from looking for a sweet low-sugar alternative to soft drink. It’s just not sufficient for use as a sports drink, and doesn’t contain significant enough quantities of any vitamins or minerals to use it as a health boost.

The best reason to drink coconut water is that it’s delicious. On a hot afternoon, pour a glass of chilled coconut water, sit out on your patio in the breeze, close your eyes, and imagine you’re on a tropical holiday. It just might work!