Devondale is one of the most recognised Australian brand names in your local supermarket, but we sought to find out a little extra about the company. So we caught up with a spokesperson for a Q&A.

It should be noted that this interview was conducted in 2016, with Devondale now operating under Saputo’s Dairy Division (Australia). 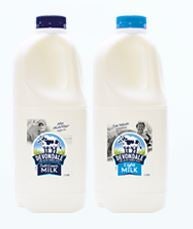 Q) It’s probably fair to say that a lot of consumers don’t give much thought to where their milk actually comes from. In a nutshell, can you tell us about Devondale milk and how/where it is produced?

A) Devondale Murray Goulburn (MG) launched its award winning Devondale branded daily pasteurised milk in 2014. Our milk is produced with care, love and attention because the farmers who make the milk control the company that sells it… so it’s in their interests to give Australians the best tasting milk possible. Our milk is manufactured at MG’s state-of-the art chilled milk processing plants located at Laverton in Melbourne and Erskine Park in Western Sydney.

Q) When consumers buy Devondale milk, how much money goes back to the farmer here in Australia?

A) Devondale Murray Goulburn is Australia’s leading dairy foods company. It is a co-operative 100% controlled by Australian dairy farmers, which means that the farmers who make the milk control the company that sells it.

Q) Who is Devondale Murray Goulburn?

A) Devondale Murray Goulburn is Australia’s largest dairy foods company. It is a co-operative 100% controlled by Australian dairy farmers. MG was formed in 1950 and today consists of more than 2,600 farmer/shareholders and more than 2,400 employees. MG is also Australia’s largest dairy food exporter. MG produces a full range of dairy foods, including drinking milk, milk powder, cheese and butter, as well as a range of ingredient and nutritional products, such as infant formula. The company supplies the retail and food service industries globally with its flagship Devondale, Liddells and Murray Goulburn Ingredients brands.