Show Important Notes^* Hide Important Notes^*
* Overall satisfaction is an individual rating and not a combined total of all ratings. By default, brands with equal overall satisfaction ratings are sorted by the mean overall satisfaction score as rated by consumers. You can click the arrows at the top of any column in the table to sort by the results in that column.
^ By clicking on a brand, 'go to site' or green button, you may leave Canstar Blue and be taken to our referral partner to compare. Canstar Blue may earn a fee from providers for this referral. You agree that Canstar Blue’s terms and conditions apply to this referral. If you click on a brand that our referral partner does not cover, you will be taken to a brand page on Canstar Blue.
Canstar Blue research finalised in May 2019, published in May 2019. 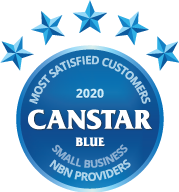 No matter the industry, every small business needs an internet connection to survive. Whether it’s organising rosters, doing the pay run, emailing staff, operating point-of-sale systems, or ordering products, businesses in Australia can thrive with a solid broadband connection. As they say, a small business is only as good as its communications, and having reliable and fast internet is a sure-fire way to keep communications flowing. So if your small  business is less than satisfied with your current internet provider, our 2020 review and ratings may help you find a better deal.

Canstar Blue annually surveys hundreds of business owners and key decision-makers across Australia to find out which broadband providers are consistently delivering, and which are more like a bump in the road. After a lengthy six years as Canstar Blue’s number one rated business broadband provider, iiNet has finally been dethroned, with Optus sweeping in to take the top spot in our 2020 review.

While no NBN provider is perfect – and it seems reasonable to assume you’ll have the occasional issue with any telco – our ratings are designed as a high-level guide to which providers are getting it right more often than not, and which ones still have work to do.

Here are the best NBN providers for business, as rated by consumers in Canstar Blue’s 2020 review:

Optus has come out on top in our 2020 ratings, achieving the only five-star score for overall satisfaction in this year’s review. Last year’s winner iiNet came in second place, although it maintained impressive results across most review categories, while Telstra and TPG followed in third and fourth place respectively. Each of the four included providers was rated on a variety of important factors, including customer service, network performance, value for money, clarity and flexibility of contract, and bill clarity.

Read on for an overview of what the four telcos in our 2020 review have to offer business NBN customers, as well as a list of other providers who market their services at businesses.

There is a diverse range of internet plans on offer for businesses big and small. Here is an overview of what the biggest internet providers in Australia are offering business owners when it comes to NBN.

Optus’ small-to-medium business broadband is priced on par with its residential NBN and ADSL plans, with prices beginning from $75 per month for unlimited data. NBN plans include Standard Plus (NBN 50) speeds as standard, with a boost to Premium NBN 100/20 available for an additional $20 per month.

Optus scored five stars for overall satisfaction in 2020, as well as five stars for customer service and clarity/flexibility of contract. The telco was awarded four stars in all other categories, including network performance and value for money.

iiNet’s small business broadband options include both NBN, ADSL2+, fibre and cable connections, with unlimited data and high-speed NBN plans available. Unlimited data plans begin at $79.99 per month for both basic NBN and ADSL customers, and include pay-as-you-go calling, a static IP address, and a free Wi-Fi modem on 24-month contracts.

iiNet was awarded four stars for overall satisfaction in 2020, but did take home five-star results for network performance, value for money, clarity and flexibility of contract, and for bill clarity.

Small business broadband from Telstra begins at $100 per month for unlimited data for both NBN and ADSL customers. Plans are available on a casual month-to-month basis, and new customers will receive a Telstra Smart Business Modem with 4G mobile broadband backup. However, cancelling your service within 24 months means you’ll need to pay out the remaining cost of your modem.

Telstra was rated four stars for overall satisfaction, bill clarity, and contract flexibility in our 2020 review, and received five stars for network performance.

TPG offers small business NBN plans from $69.99 per month at Basic NBN 12 speeds. NBN 50 and NBN 100 options are also available, and all include unlimited data and your choice of a month-to-month or 18-month contract.

TPG received four stars for overall satisfaction in our 2020 ratings, with a five-star score for customer service and four stars for network performance, value for money, and contract clarity/flexibility.

If you’re looking for a broadband provider to service your business – whether it’s from home, the office, or anywhere in between – here is a list of telcos marketing services in your direction:

What did we learn about business NBN customers?

Canstar Blue’s 2020 survey of business broadband customers has revealed the extent to which many are incredibly reliant on fast, reliable internet to operate efficiently.

So, many businesses are still experiencing challenges with their broadband connections. Are they happy with their current provider and plan?

Choosing an NBN plan for your business

No business should have to put up with a subpar NBN plan. Often, the internet is the lifeblood of a business, and having a lacklustre plan can be both frustrating and financially impairing. This year, two providers in our annual review were rated five stars in terms of network performance – iiNet and Telstra.

If value for money is a key factor in finding a NBN plan, last year’s winner iiNet was the sole telco to score six stars for value in our 2020 ratings, followed by Optus and TPG with four stars each. In terms of customer service, Optus and TPG were each rated five stars, while iiNet was the highest scoring provider for bill clarity. Finally, Optus and iiNet both achieved five stars for clarity and flexibility of contract.

What’s most important to business owners will vary, but our ratings provide a guide as to which telcos are keeping customers happy across various categories.

Looking to make dollars and cents of your personal or small business finances? MYOB’s accounting software includes options for invoicing, payroll, expenses and more. For more information on the featured plans below, click the button below to be referred to MYOB’s site.

Canstar Blue surveyed 2032 Australian small to medium-sized business owners or key decision-makers (i.e. the key decision-maker for the business) across a range of categories to measure and track customer satisfaction, via ISO 26362 accredited research panels managed by Qualtrics. The outcomes reported are the results from customers within the survey group who currently have a business broadband plan and the business pays the bills – in this case, 787 people. 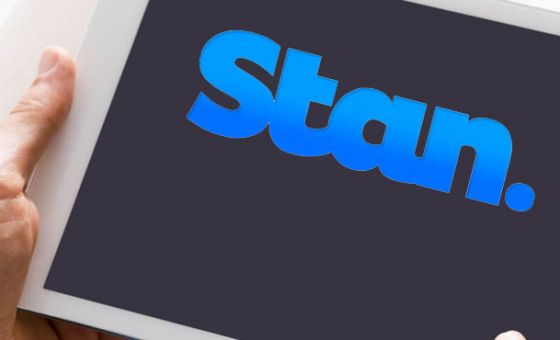 Review the most bingeworthy Netflix shows in Australia, including Mindhunter, Fargo, Mad Men, The Confession Tapes and more at Canstar Blue.

There are many claimable expenses you might not be taking advantage of when tax time rolls around. Here are the strangest work-related items you can claim as deductibles on your next tax return in Australia.

Modems Vs Routers: What’s the difference?

Compare the differences between internet modems and routers and find out which one is right for your home with Canstar Blue.