If you’re a parent looking for a good phone plan for your child, you may be surprised to find that there are few plans actually tailored for children – after all, a phone plan is generally a phone plan, regardless of your age. However, child-appropriate plans are out there, so if you’ve made the decision to give your child their first phone —or want to find a better deal than their current plan— you’ve come to the right place.

While some mobile virtual network operators (MVNOs) offer cheap phone plans, a few of them will offer additional incentives for the kids’ plans, such as access to cyber safety programs, which allow parents to monitor their child’s online activity.

Some of the best phone plans for kids with extras such as cyber security, come from the smaller telcos including:

The following table shows a selection of prepaid plans from Canstar Blue’s database for $30 or under per billing period, listed in order of cost from lowest to highest, then alphabetically. Use our comparison tool to see a wider range of plans from other providers. These are products with links to referral partners.

Read on as we go through the child-friendly options worth considering, and provide tips and advice on finding the best plan for your child. 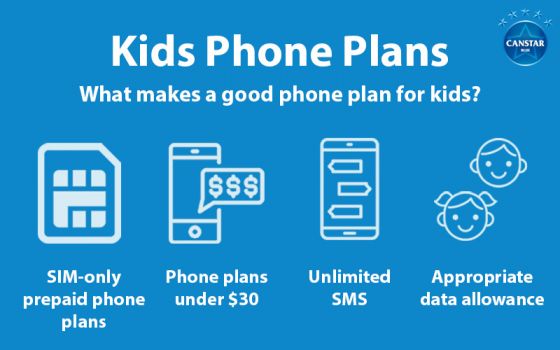 When it comes to picking the best features for your child’s mobile plan, you’ll need to consider what type of phone user they will be. Will they be a light or heavy data user? Kids generally love to text and use data, but having a limit on calls is also hugely beneficial. Their age might also determine the inclusions they need — younger kids might use less data while teenagers are more likely to use more data. Therefore, consider the following as bare minimum requirements for a good phone plan for kids:

The type of features that best meet your child’s phone use may also be related to their age, with older teenagers more likely to require a lot of data for video streaming, Snapchat, and more.

Until recently, there were no phone plans from the mainstream Aussie carriers that could justifiably label themselves as ‘for kids’. However, that’s changed with several low-cost MVNOs that have phone plans targeted at the younger members of the family.

Parents who want to keep their children safe online can sign on for Yomojo’s Family Eye service – an optional add-on that allows parents to keep track of their kids’ physical whereabouts and internet activity. Family Eye includes safe browsing features, location alerts, app and camera management, and more, and is priced at $5 per month, per child (but free for your first month of use).

Finally, if you have multiple kids —or want to keep the whole family’s phone lines on a single account and bill— Yomojo also offers Family Bundles. Bundles allow you to sign up to six separate mobile lines under one account and also offer monthly discounts of up to 15% for your entire mobile service.

While Woolworths Mobile doesn’t have a specific phone plan for children, the telco does offer incentives such as access to Family Zone cyber security and will sometimes run special offers such as bonus data or half-price SIM cards. Woolies also offers data banking on all plans (even prepaid) and you can store up to 100GB in your data bank. The only catch is you need to pay your bill on time or recharge your prepaid plan before expiry.

If you’re interested in a plan with Woolworths Mobile, you’ll be able to choose from 12-month SIM-only postpaid plans (which are listed below), prepaid plans and plans bundled in with a new smartphone (including the latest Samsung and OPPO devices). There are four plans at $20, $30, $40 and $50, with all plans including the same data amount across prepaid and postpaid offerings. The only difference is the expiry or contract lengths on the plans.

For kids just starting out on their first phone plan, these cheaper options from Yomojo and OVO Mobile are a low-cost, low-risk way of working out just much they’ll use their phone and being prepaid, you won’t incur any automatic excess data charges with either provider. While Woolworths Mobile does have some extra incentives, the plans are a little pricier than the kids’ plans from the other two telcos, but it might be a good option if you’re looking at a new phone for your child.

Other plans to consider for kids

You’ll have noticed that, when it comes to prepaid and postpaid plans, it’s often the smaller service providers offering the cheap phone plans for kids. But if your child uses their phone for social media, plus streaming and other data-intensive applications, it could make sense to get a phone plan with around 10GB.

But don’t stress! There are many providers that pack in lots of data for a lower monthly price than you’d expect. The table below shows a selection of postpaid plans from Canstar Blue’s database with a minimum of 10GB data, listed in order of advertised standard cost, lowest to highest, then by data allowance, largest to smallest. Use our comparison tool to see a wider range of plans from other providers. These are products with links to referral partners.

Prepaid vs postpaid for kids

The first (and most important) decision to make in regards to your child’s phone plan is whether you want to go prepaid or postpaid. Postpaid plans see you pay your bill after your billing cycle is complete, while prepaid means you’ll pay in advance (and can only use the plan inclusions you’ve paid for upfront).

The best thing about prepaid phone plans is that child can only spend the set amount of call, text and data inclusions that come with their plan. There is no bill shock with prepaid: once your credit is up, that’s it, unless you manually recharge.

This can be a great way to help kids understand budgeting. Another positive is that, if you’re short on money one month or if you need to take your child’s privileges away, you can simply not recharge their plan. With postpaid plans, you would have to cancel the contract entirely.

The most significant drawback to prepaid plans is that, once you use all your inclusions, you can no longer use data, make any calls or send text messages. This lack of credit potentially takes away the safety net of your child being able to call you in an emergency.

Prepaid plans also tend to have shorter expiry periods, which could mean you find yourself having to recharge every week or so, or 13 times a year rather than 12 times. And as a general rule, prepaid plans may lack the same value as postpaid plans, where you often get more for your money (and a lot more providers on offer).

The best thing about postpaid phone plans is that you will always have a service to call on when it’s needed. Postpaid provides the extra security of being able call home in an emergency no matter what — your provider will simply charge you extra if you go over the plan’s limitations.

Postpaid plans also take away the hassle of having to manually recharge your plan (although some prepaid plans do allow users to auto-recharge). You are also likely to get better value with a postpaid plan.

The biggest negative of postpaid plans is basically the biggest positive in reverse. Being able to exceed your plan’s limits in emergencies is great, but this also means the feature is there to be abused. Bill shock is a real thing, as extra credit is usually automatically added to your account. The going rate is $10 per 1GB, so if you go over your data cap, you may find you’ve spent a lot more than you budgeted for!

The other negative is that you can’t just take a break in your service when you want, unless you cancel your contract. The nature of postpaid plans means you sacrifice this flexibility, even if you’re on a month-to-month contract that doesn’t lock you in for a year.

Whatever type of phone plan you go with for your kid(s), the take-home message is that there are some awesome deals available if you’re prepared to shop around. In the prepaid space, it’s hard to beat OVO Mobile and Yomojo’s plans for overall value and cyber security add ons, but the likes of Vodafone, Boost Mobile, Moose Mobile, and Catch Connect are great for low-cost, big-data plans.

Should I get my child the latest iPhone?

Your child may be begging you for the latest 2019 iPhone 11 or 11 Pro or even the slightly older 2018 iPhone XR, both of which are serious financial commitments. Even bundled-in with a plan, you’re looking at spending at least around $80 a month with a lock-in contract of between 12, 24 or 36 months (depending on your telco).

Outright, these phones cost around $1,200 and $1,800 at a minimum respectively — so even buying upfront can be a huge hit to your budget.

If you’re paying the bill, you ultimately have the final say.  Nevertheless, if you’re happy with them having the newest iPhone, there are a few considerations to take in:

In any case, there are three key providers that offer plans with the latest iPhones bundled in – Telstra, Optus, and Vodafone. All have their unique selling points, so it can pay to compare them all if you’re after the latest and greatest from Apple.

The below table lists some of the cheapest 24-month plans bundled with the 64GB iPhone XR on Canstar Blue’s database, listed in order of cost from lowest to highest and then by data allowance, largest to smallest. Use our comparison tool to see plans from a range of providers. This table includes products with links to a referral partner.

It’s your (the parent’s) call

At the end of the day, you know your child best, and if you’re paying the bill you get to decide where the money goes. It pays to look at the smaller telcos offering cheap plans: there are over 30 providers out there, many with plans under $15. There’s a lot to choose from – you’ll just have to do your homework!

Phone Plans for Kids featured in this article: