The Asko brand started with a line of washing machines over 60 years ago and has now expanded to designing and manufacturing a large range of kitchen, laundry and professional appliances. With its aim to combine functionality and design, its Duo Fusion cooktop won the Canstar Blue Innovation Award in 2016. There’s seemingly no stopping this Swedish brand now with its strong focus on energy efficiency and reliability. Read on for what its washing machines have to offer in the Australian market.

Asko has several freestanding washing machines, with most available in either an 8kg or 10kg capacity. The brand offers fairly efficient models, providing a range of front loaders with energy and water efficiency ratings of 4.5 stars or 5 stars.

There are certain features you can find across the full range, including:

Asko currently sells a handful of front load washing machines, typically ranging between $1,599 and $2,399. These include: 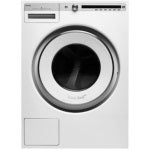 This 8kg capacity front loader features Quattro Suspension technology, which is claimed to produce less vibration when washing. Along with this, it’s designed with a stainless steel drum, a brushless motor and a spin speed of 1,600 RPM. Here are some key specs:

There are 21 programs available to choose from, giving you flexibility to set the washing machine to the type of wash cycle you need. If you have particular problems with allergy triggers, this ASKO washing machine has been approved by the Sensitive Choice Program (National Asthma Council Australia). It provides several run modes, such as the Allergy setting to remove dirt, micro-organisms and detergent residues. Similar wash programs are also available, including the anti-allergy program for cotton or synthetic materials. The Green mode is another function which might prove useful, especially if you want to reduce the amount of energy used per cycle to get a more efficient wash.

The ASKO front loader is equipped with an Active Drum technology, Quattro Construction, 2,000 heater capacity, water sensor, brushless motor and LCD display. Some safety features additionally include an emergency door opening key, anti-block drain pump, over flow protection and child protection. The washing machine can also be opened from the inside.

For a similar design but with additional load capacity and improved energy and water efficiency, then you might want to think about this Asko 10kg front loader. It’s similarly approved by the Sensitive Choice Program and contains many of the same functions and features.

Aside from the slightly higher water and energy efficiency ratings, the biggest difference between the smaller and cheaper unit above is the fact that this washing machine has a slower spin speed of 1,400 RPM. It provides delayed start and 21 wash programs, such as Super wash, Prewash, Bedding, Anti-allergy (cotton or synthetic) and a drum cleaning function.

The ASKO W4086P.W is the priciest 8kg front loader from the brand. It’s nearly identical to the Asko W408C.W in terms of price, functions and looks, but retails for $200 cheaper. The main difference is its slightly better energy efficiency and water efficiency ratings. Here are some key specs:

Pro Wash washing system, which the brand claims will allow the load to soak faster for an apparently improved result. Some other features include a high-definition LCD display, adjustable spin speed, precise temperature control and thermal & electronic protection against overheating.

Should I buy an Asko washing machine?

Asko claims to produce high-end washing machines, but for mid-range prices, in the hope of enticing homeowners to take their washing machine needs and preferences to the next level. You can expect all Asko washers to have stainless steel materials for the drum, along with a number of standard features, such as fast wash and water level sensors. All Asko machines are claimed to be precision balanced from the top to the bottom where each feature is built for durability and efficiency.

Boasting Scandinavian-inspired quality, Asko washing machines are built to last and are sure to provide a contemporary design. Something else that Asko boasts with its washing machines is the ability to adapt to any sized home, so whether you’re living solo or in a large family, Asko may have a front loader for you. To see which brand can provide you with five-star performance and the most value for money, you may like to check out our online ratings to help you compare.